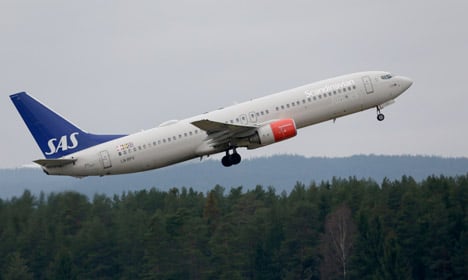 A SAS flight takes off from Oslo Airport. Photo: Vidar Ruud / NTB scanpix
Not only did the airline enjoy its best July ever, it also set a single-month load factor record, with 88.2 percent of all flights at full passenger capacity.
“Demand for long haul traffic, European leisure routes and domestic routes continues to grow,” SAS wrote in a press release.
SAS also said, however, that increased competition and lower fuel prices led to a currency-adjusted yield decrease of one percent in July and that yield “has declined more than anticipated” thus far this year.
Rival airline Norwegian announced over the weekend that it had more than 2.93 million passengers on its commercial and charter flights in July, a nine percent increase over the same month last year.
When SAS’s charter flights are included, its total July passenger numbers were at 2.74 million last month month.
SAS is 50 percent owned by the Danish, Norwegian and Swedish states. The airline celebrated 70 years in service last week.