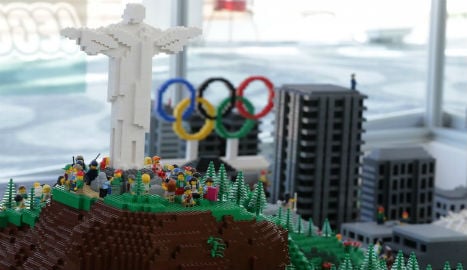 The model included landmarks such as the iconic Christ the Redeemer statue. Photo: YouTube Screengrab
The model, which took 50 professional Lego builders a year to make and contains an estimated 930,000 pieces, includes all Rio’s iconic monuments together with the stadiums, hotels, beaches, boating areas, spectators, and athletes that have come with the games themselves.
“Three different countries were involved in creating all of the icons that are seen here,” master builder Paul Chrzan told Reuters. “We did create 25 different icons of Rio – they are all visible here.”
Chrzan said the builders had had to use ten different scales in order to fit the monuments into the five metre by six metre space.
The gift was developed as a partnership between the toymaker and the Danish government.
Lego has also built models of Vinicius and Tom, the mascots for the Olympics and Paralympics out of bricks for the event. It is the first time Olympic mascots have ever been built out of Lego.
For Lego geeks, here are some videos showing the builders at work.
Url copied to clipboard!