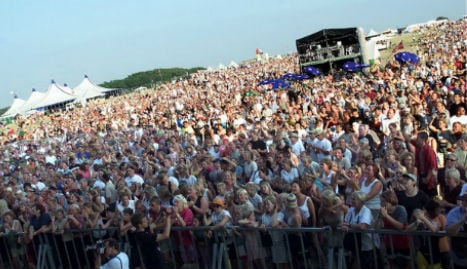 Langelandsfestivalen (archive photo): Photo: Mogens Flindt/Scanpix
According to Danish police, the girl was one of nine young women who reported being sexual molested at the Langelands festival on the weekend, with one woman reporting that she had been raped by two boys.
The two alleged rapists have been released after being held by police overnight.
The three boys were accused by the girl of holding her tightly and then groping her on the first evening of the festival on Friday.
Allan K. Pedersen, the organiser of the festival, said that the managers of the local asylum centre, who were responsible for the boys, had assured him that staff would be on hand to oversee them, but did not appear to have maintained adequate control.
“We realised when we got in touch with the reception centre to ask them to pick up the boys, that they could not tell us how many boys were actually in the area. They didn’t know. I think that is too laissez-faire an attitude to have,” he told Danish national broadcaster DR.
Sisi Eibye, who manages the centre, told DR that the boy’s behaviour had been “totally unacceptable”, but stressed that she and her fellow employees have no powers to detain or sanction the asylum seekers in their care.
“We have no sanctions, and all we can do is report it to the police if the boys are gone more than a day. We can not lock them up,” she said.
Kirsten Fischer, an inspector of police on Funen, said that not all of the nine reports concerned boys from the centre.
“The characteristics of the offences are all very different, so one must not conclude that all the abuses were committed by boys from the asylum centre,” she said