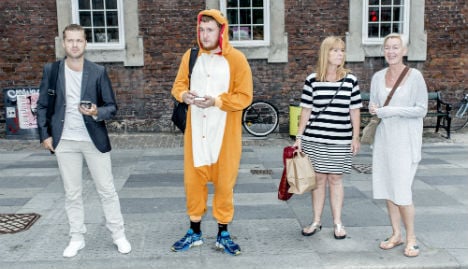 Danish Pokémon Go players in Copenhagen. Photo: Emil Hougaard/Scanpix
Forty-one-year-old Simon Bolt Brinkmann disappeared in May under suspicious circumstances in the same area outside Odense, on the Danish island of Funen, where the body was found in a ditch on July 20.
His body was so badly decomposed that Brinkmann could only be identified by his teeth.
“There is no immediate evidence to suggest that there is a crime behind his death, and that’s all I can say about it,” Andreas Bruun from the local Funen police told Denmark’s Ekstra Bladet newspaper.
Pokémon Go, a location-based augmented reality game, has been a huge global phenomenon since it was introduced earlier this month, with Denmark no exception.
The game has sent players roaming around little frequented areas hunting cartoon animals around the real world with their phones.  A woman in the American state of Wyoming found a corpse in a river while hunting down the virtual monsters.
The game has also brought unexpected dangers, with a Danish 21-year-old on Thursday killed by a delivery van near Aarhus while apparently playing the game. Police said in a press release that they had found the app still running on the man’s phone when they arrived at the scene.
“When we arrived at the scene of the accident, we found his phone unlocked with the Pokémon app running. We cannot know for certain whether he was playing the game at the time of the accident, however,” Jørn Kristen Nielsen from the local Himmerland police told TV2.
Police districts across Denmark had been deluged with calls from concerned citizens panicked by intruders who later turned out to be Pokémon players.