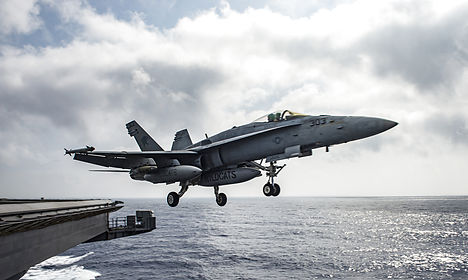 A fighter jet launches from an aircraft carrier in the Mediterranean Sea. Photo: US Navy/Scanpix

The survey found that 33 percent of Danes believe that Denmark is at war with Islam, while 56 percent disagree with that view.

The survey asked respondents whether they agreed or disagreed with the statement that “Denmark, together with the rest of the Western world, is at war with the religion of Islam and not just radicalised Muslims”.

11 percent of the 1,045 respondents answered that they did not know.

The findings were published in the wake of a string of attacks on civilian targets across Europe and the United States in recent weeks, many of which the Middle Eastern terrorist organisation Isis has taken credit for.

Jørgen Bæk Simonsen, an Islam expert at Copenhagen University, told Danish broadcaster TV2 that the results of the survey were “worrying.”

“It is thought-provoking that we have now reached a point where the way we talk about one another has led to a third of the country’s population believing that we are at war with Islam,” Simonsen said.

The survey also identified groups within the survey where the majority believe that Denmark is at war with Islam.

Among others, it was Danes above the age of 70 as well as Danes with a lower level of education (upper secondary at most).

Among the respondents who identified themselves as voters of the anti-immigration Danish People’s Party, 60 percent agreed with the statement.

See also: Danish MP: 'Only thing worse than a devout Muslim is a convert'

Danish People's Party MP and integration spokesman Martin Henriksen told TV2 that he did not agree with the majority of his party’s voters, however.

“We are only at war with parts of Islam, and you could say that we are in a culture war with some of the more moderate Muslims. They are, after all, trying to make Islam a more dominant force in Danish society using other means than weapons and violence,” he said.

Earlier this week, another survey conducted by Megafon found that three out of four Danes want moderate Muslims and imams to be more vocal in dissociating themselves from terrorist acts.

Commenting on the findings of that survey, Özlem Cekic, a Muslim and former Socialist People's Party MP, stressed that more bridge-building work and dialogue was needed between Muslims and non-Muslims in Denmark.

“What we should be doing instead is supporting one another, both Muslims and non-Muslims. The terrorists win as soon as we direct our anger toward moderate Muslims instead of at the terrorists themselves,” Cekic told TV2.