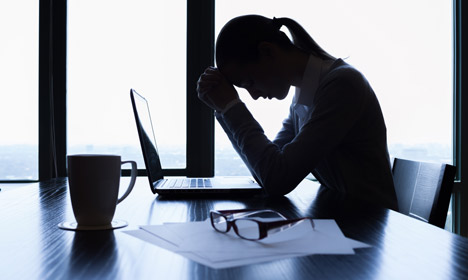 The busier one is at work, the more likely their health is to suffer.
That’s the conclusion of a new major Danish-American study reported on by Politiken newspaper on Friday.
In what was described as the largest study of its kind to date, an economics professor at the University of Copenhagen and two colleagues from Purdue University found that when Danish production companies enjoy an uptick in business, their employees pay for it with their well-being.
The researchers said that when a production company increases its exports by ten percent and employees are made to work extra hours to carry the load, the workers suffer more illness and injuries.
This is particularly true for female employees, professor Roland Munch told The Local on Friday.
“You especially see women buying more anti-depressants, and getting diagnosed with heart attacks and strokes to greater extents,” he said.
Women are 17.4 percent more likely to have a heart attack when their companies’ orders increase, 6.4 percent more likely to suffer a workplace injury and are 2.5 percent more likely to suffer severe depression.
See also: Women should lounge on sofa after work: study
The extra hours led to a five percent increase in work injuries for men but appeared to have no effect on their likelihood of having a heart attack. Male workers actually became two percent less likely to suffer depression when their companies were busier than normal.
“Our results show that there are real consequences when one is made to work too much,” Munch told Politiken.
“If companies suddenly has their order books full and have to produce more, employers should ask themselves whether they should allow their employees to work more [hours] or whether they should hire more people,” he added.
Hans Jørgen Limborg, a work environment consultant, told Politiken he wasn’t surprised by the results.
“With the labour market we have today, increased production is primarily met by people working longer [hours] and more intensively,” he said.
Munch’s study followed 150,000 Danish employees over a 12-year period.