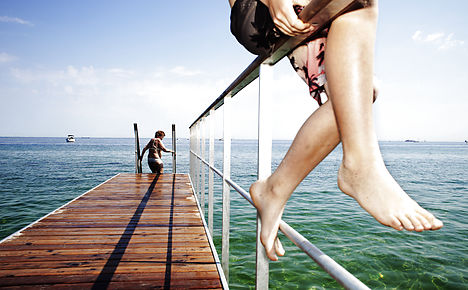 Take a dip this weekend – you never know what the rest of summer will have in store! Photo: Erik Refner/Scanpix
The Danish Meteorology Institute said that the nation is in for a genuine heat wave – by Danish definitions anyway.
Highs on Wednesday, Thursday and Friday all exceeded 25C, giving summer-starved Danes the conditions needed to qualify as a heat wave (varmebølge). Depending on Friday’s final outcome, we could even qualify for the other Danish term for a heat wave, hedebølge, when there are at least three days with temperatures over 28C. According to TV2, Wednesday hit 28.0C and Thursday topped out at 28.2C.

DMI said that the warmth should continue through the weekend and beyond.
“It will be a really warm weekend but as was the case over the past days there will be local variations. And once again the eastern part of the country will have more sun than Jutland and Funen,” meteorologist Lars Henriksen told news agency Ritzau.
“In general, temperatures will be between 20 and 25 degrees, but locally they could get all the way to 28C,” he added.
DMI predicts that the heat will remain through at least Monday, when it is calling for highs between 22-27C. Conditions are then expected to turn more ‘typically Danish’ on Tuesday and Wednesday, with highs between 17-22C and occasional showers.
The current heatwave was a long time coming. Before the mercury topped 25C on Wednesday, Denmark had not had an official ‘summer day’ since June 25th.