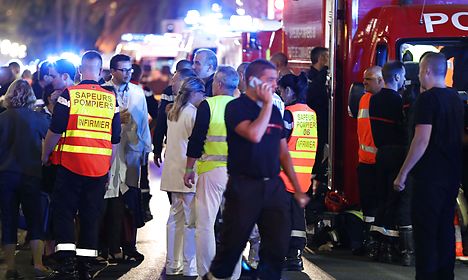 Police officers, firefighters and rescue workers are seen at the site of the attack on the Promenade des Anglais on July 15, 2016. Photo: AFP PHOTO/Valery Hache
At least 84 people have died and 18 are reported injured after a truck drove into Bastille Day celebrations in the French Mediterranean city.
Prime Minister Lars Løkke Rasmussen called the incident “an attack on us all” and said that Denmark stood by France.

#AttentatNice is an attack on us all. An attack on democracy & human rights. Denmark is with France and the victims' families in the sorrow

Political Spokesperson Nicolai Wammen of the opposition Social Democrats called the attack “cowardly and vile”, saying his thoughts were with the victims.

The Social Liberal (Radikale Venstre) Party leader Morten Østergaard echoed Wammen's sentiments, describing the events in Nice as “a tragedy”, while former leader Margrethe Vestager, now European Commisoner for Competition, said “The sorrow of the families and friends and France is our sorrow too”.

Lost lives, lost loved ones. The sorrow of the families and friends and France is our sorrow too #NiceFrance

Liberal Alliance leader Anders Samuelsen said that “the feeling of helplessness should be replaced by the will to act” while also condemning the “atrocious” attack.

So far, no Danish casualties have been reported after the attack, which took place last night at 11pm local time.
“We have no information telling us that there are Danes amongst the casualties. We are in contact with the French authorities and they will inform us if that is the case,” said Martin Ellehøj, on-duty manager at the Ministry of Foreign Affairs' citizens' service (Borgerservice), reports Jyllands-Posten via news agency Ritzau.
The ministry said that it had no plans to issue specific travel warnings following the attack.
“We have no travel warning for France, but refer travellers to the local authorities. If you are planning a trip to Nice, we advise you to check what the French authorities are saying about Nice and the Nice region,” Ellehøj told Ritzau.

PARTNER CONTENT
Would your career benefit from an EMBA?

PARTNER CONTENT
Why France is the place to build your business career
Url copied to clipboard!