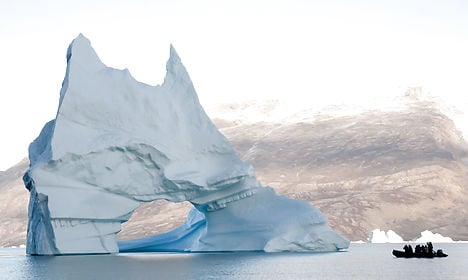 Melting ice from Greenland is now thought not to be the cause for the 'blue blob'. File photo: Iris/Scanpix DK
Maps released last year by the National Oceanic and Atmospheric Administration (NOAA) showed a 'blue blob' in the North Atlantic near Greenland and Iceland.
With 2015 setting records for high temperatures globally, the blue blob on the map sparked concern amongst global warming experts.

The Danish Meteorological Institute recently tweeted a global heat map showing the blue blob
Researchers suggested at the time that the unusual spot on the map might have been a result of a slowing down of the 'meridional overturning circulation' (AMOC) – an interaction between hot and cold ocean temperatures and salt levels in the North Atlantic Ocean.
This in turn might have resulted from melting ice from Greenland sending freshwater into the ocean and affecting temperatures.
The Gulf Stream – the warm current that enables Norway to retain a relatively warm climate for its latitude – would be at risk of changing course should the blue blob indeed be a sign of slowing AMOC.
A weakening of the circulation of currents in the North Atlantic would cause a “significant shift in the climate throughout northwest Europe,” said the Danish Meteorological Institute (DMI) in a recent analysis published on its website.
Norwegian climate researcher and professor Tor Eldevik told newspaper Aftenposten in March 2016 that he was not convinced about the theory that the blue blob was caused by melting Greenlandic ice.
“[The theory] could make sense, but the current changes on Greenland are, as far as I understand, not of the magnitude that would affect the Gulf Stream on a large scale,” Eldevik said.
Now DMI's climate researcher Peter Langen has poured cold water on experts' concerns about the cold spot.
“We know that interior ice melting [from Greenland] is increasing, but [a] new study suggests that, as yet, not enough meltwater has been released to affect ocean circulation significantly,” Langen told DMI.
Langen said that a study using ocean modelling techniques had measured the extent to which melting water from near the Greenlandic coast would affect seas further out.
“[The] conclusion is that the freshwater is diluted over such a large area that it has not yet affected circulation,” he said.
Langen told DMI that the cold spot on the heat map was most likely to be caused by a simple weather variation.
“It [the blue blob] emerged during a very cold winter in the area in 2014 and 2015, and the cold actually resulted in an increased mixing of surface water with the deeper levels. If the cause of this was meltwater, this mix would be thinned out,” he said.
Langen explained that researchers were able to reconstruct the cooling of water in the area through energy calculations, making the weather theory the strongest explanation for the North Atlantic's cold blob.