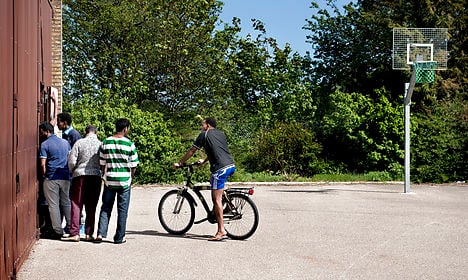 Sigerslev Asylum Centre. File photo: Linda Kastrup/Scanpix
According to a parliamentary answer provided by Minister of Finance Jacob Jensen, the so-called 'low integration benefit' (lave integrationsydelse) has saved state coffers one billion kroner ($145 million).
The new lower welfare for refugees was introduced by the Venstre Party government after it won the 2015 general election. The move was part of a series of tighter measures taken by the government aimed at making Denmark a less attractive proposition for asylum seekers.
The lower payment is equivalent to about half the amount received by people on normal unemployment benefits.
The new rules were expanded on 1st of July 2016 to included any refugee registered in Denmark within the last seven years.
The savings made by the state from the lower payments could add up to 1 billion kroner by 2020, depending on the number of refugees taken in by Denmark in the intervening years, according to the Ministry of Finance.
The government, along with supporting parties Liberal Alliance and the Conservatives, recently said that they were prepared to use the savings to reduce tax, reports Jyllands-Posten.
The anti-immigration Danish People's Party (DF), which has more MPs in Parliament than any other party apart from the Social Democrats, has stated that further cuts to immigration are needed before tax reduction are affordable.
But Jensen told Jyllands-Posten that the measures taken since 2015 had made significant savings already.
“The first billion has already been found by introduction the integration benefits. It is therefore in our view wrong to say that financing can not be taken from immigration,” said Jensen.
But Jensen did not confirm whether the government intended to make further cuts in the area.
“The are undoubtedly other places, where that is possible, if we look for them,” the minister said to Jyllands-Posten.
The Social Democrats voted against the low integration benefits in parliament after the government rejected the suggestion of including provisions for children such as free after school activities, clothes and books in the benefits package.
The party has now criticised the government for its apparent use of the saved money for tax breaks.
“Whether it's 100 billion or one billion kroner, I think it's wrong to use this money for top tax bracket reductions,” acting political spokesperson Ane Halsboe-Jørgensen told Jyllands-Posten.
But Halsboe-Jøregensen would not confirm whether her party would roll back the measures should it win the next general election.
“We will assess the situation at the time we regain power. We were against its implementation – we have said that all along – and we think it is the wrong way to go,” she said.