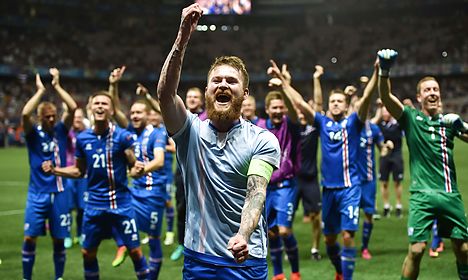 Iceland's players celebrating their win over England. Photo: BERTRAND LANGLOIS/SCANPIX
But the national team is not happy about all of its new fans, especially those who use their feat on the pitch to promote clearly racist messages.
The Football Association of Iceland (KSÍ) has put out a statement slamming the nationalist Danes’ Party (Danskernes Parti) for a racist Facebook post insinuating that France’s national team should not be allowed in the Euro 2016 tournament because of the African heritage of its players.
The post features a photo of a group of black French football players alongside a photo of Icelandic captain Aron Einar Gunnarsson. Just to drive home the point even further, the French players’ photo has a black border, while the Iceland photo has a white one.
The party encourages followers to share the post “if you think that ‘France’ should play in the African Nations Cup’.
“If you don’t think that Europe and Denmark should be transformed into an African backyard, then enter your email address at www.stemdansk.dk [vote Danish, ed.] so the Danes’ Party can be allowed to run for parliament,” the post reads.
KSÍ was not amused and issued a statement saying “separatist forces have no place in football”.
“With the Euros, Island and Islanders the world over earned respect for a positive attitude and KSÍ wants nothing to do with this kind of hate propaganda,” the association wrote.
“KSÍ regrets being associated with the Danes’ Party and will request that it is immediately stopped. We will thus also encourage the public to report these kinds of things to Facebook,” the statement continued.
KSÍ has requested that the Danes’ Party remove the post, but as of noon on Thursday it is still on Facebook.
The nationalist Danes’ Party was founded by a former Neo-Nazi and wants to see all non-Western immigrants kicked out of Denmark.
Earlier this year, it was embroiled in controversy for advertisements depicting the white silhouettes of playing children with the slogan “Your children deserve a Danish Denmark.”
The party is currently truing to gather enough signatures to qualify for the next parliamentary elections. The Danes’ party put forth several candidates in the November 2013 municipal elections but not a single one was voted in. Still, the 17,419 votes received by the far-right party were 5,180 more than in the municipal election of 2009.