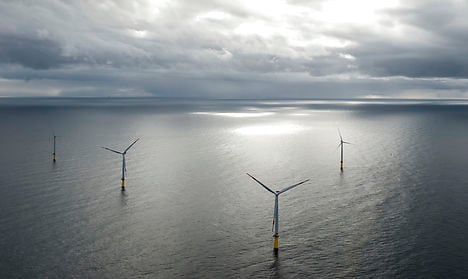 Dong's new wind farms will be completed by 2020. Photo: Søren Bidstrup/Scanpix
The projects would be built for €72.70 (540 kroner, $80) per megawatt-hour, significantly below the group's 2020 target of bringing costs below €100 per megawatt-hour over the life of a project.
“This demonstrates the great potential of offshore wind,” Samuel Leupold, Dong's head of wind power, said in a statement.
The Borssele 1 and 2 wind farms would be built 22 kilometres off the Dutch province of Zeeland and would be completed by mid-2020, according to the country's Ministry of Economic Affairs.
“One million households will be provided with electricity generated by the 700 megawatt wind farm off the coast of Borssele,” the Dutch government, which will subsidise the project for the first 15 years, said in a statement.
Including the cost of grid connections, experts estimated the price for the projects would be €87 per megawatt-hour, which wind industry trade group WindEurope described as being “beyond even the most optimistic expectations in the market.”
“It now puts offshore wind in the same cost range as conventional power generation,” WindEurope chief executive Giles Dickson said in a statement.
The previous record was held by Sweden's Vattenfall, which last year won a tender for a wind park off Denmark for €103 per megawatt-hour excluding grid connections.
Government-controlled Dong said factors allowing it to cut costs included improvements in the design of wind turbines and blades, better foundation designs, higher cable capacity and “a growing and competitive supply chain”.
“In addition, the Dutch sites offer good seabed conditions as well as good and stable wind speeds, which contribute to high output from each turbine,” it said.
Dong Energy, the world's largest operator of offshore wind farms, last month made its stock market debut in Copenhagen after selling coal-fired assets in recent years and transforming itself into a global renewable energy leader.