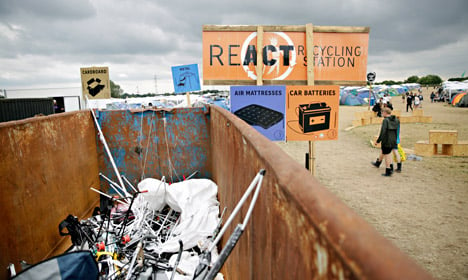 Roskilde Festival is a spectacle that must be seen to be believed. Some 130,000 people from all over the world descend upon a small town west of Copenhagen for eight days of unbridled festivities.

This mass influx turns a field into Denmark’s fourth largest city for a week. With those sheer numbers compressed into such a small space, Roskilde also brings with it serious challenges in the form of waste and sustainability.

For decades, Roskilde Festival has been striving to minimize its environmental impact. This year is no different, as the festival is aiming to improve its cleaning, recycling and sustainability efforts even more in 2016.

This year's edition improves upon a number of environmental issues, one of which is a target to reduce the CO2 emissions by up to 20 percent. To that end, organisers have turned to the sun, a somewhat infrequent guest during the festivities. With a generator system using solar cells to help power the party,  there is even more of a reason for festival-goers to appreciate the sun’s scattered appearances.

Feeding the huge volumes of people at Roskilde has been an area that organisers have tried to make as environmentally friendly as possible each year. The festival contains over 120 food stalls that help ply guests with over 200 tonnes of food. This year, the required percentage of organic ingredients has been increased from 45 to 75 percent. In 2017, that will be increased even further to 90 percent. The 'Clean Out Loud' area capacity has been increased by 2000 more campers this year. Photo: Christopher Manion

One of the most successful initiatives at the festival has been the ‘Clean Out Loud’ camping area. The camp has been increased from 5,000 inhabitants to a staggering 7,600 this year, appealing to like-minded eco-conscious individuals who come together to promote sustainability as a communal effort.

This includes bringing a little bit of competition to the waste-management game, with the campers pitted against each other for the 'best bin'.

Roskilde regular Maja from Odense is one of many campers staying in the 'Clean Out Loud' area. She enthusiastically told The Local that their camp's bin represents their stance on waste and the satisfaction in knowing she would be surrounded by like-minded people.

“We made our special bin to represent how we feel about recycling, it's a big smiley face and that's how we feel when we help the environment by recycling: We love Mother Earth! We had to write an application to stay here, so we were happy to know we would be around people like us,” she said.

29-year-old Morten from Copenhagen is here for the 12th year in a row and this is his first year in the 'Clean Out Loud' area.

“We decided to stay in the 'Clean Out Loud' area because we feel a little too old for the mess and craziness of some camping sites in Roskilde. It's great here and we all appreciate the tidiness of this area”, Morten said. Taking a walk around the area it is clear sustainability can take many wondrous forms, furthermore showcasing how it is not just the efforts made by organisers that make a difference, but also the efforts of individual attendees.

Roskilde has also introduced the ReAct campaign, 11 waste recycling stations where festival-goers can drop off everything from air mattresses and car batteries to cardboard with a clean conscious, knowing that the materials will be either recycled or 'upcycled' into new resources after the festival. One of the ReAct waste centres. Photo: Kristian Ridder-Nielsen

Those familiar with festivals will be fully aware that a fair amount of alcoholic beverages are consumed. With this comes the issue of thousands of empty bottles and cans scattered across the festival, quite an unsavoury sight.

While the hordes of deposit collectors are once again out in full force, there is also a new 'Super Refund Stall' initiative to help smooth out the process. The two 'super stalls' allow collectors to drop off more than 100 items a time and also accepts cans and bottles that are not part of the Danish deposit system.

This allows a significant increase in recycling, especially when considering the sheer volume of drinks brought in from outside of Denmark, whether via the Danes' fondness for bulk-buying cheap beers on the German border or the thousands of guests arriving from other Nordic countries.