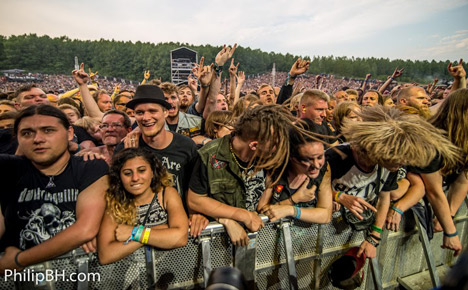 Copenhell was completely sold out for the first time ever. Photo: Philip B. Hansen
For a fourth consecutive year, photographer Philip B. Hansen and I ventured out to the industrial shipping yard to witness Denmark’s craziest metal extravaganza, Copenhell, this past weekend.

Streaming through the gates of hell. All photos: Philip B. Hansen
What astounds most at Copenhell is that it is probably Denmark’s most ‘complete’ festival experience. Everything at Copenhell is tailored to every imaginable shade of metalhead. As tradition dictates, this year’s headliners were largely legendary acts from metal’s heydays in the 70s and 80s.

Only three photographers were allowed in the pit for Sabbath. Here is our best attempt at capturing the legends.
The biggest headliner came in the form of Black Sabbath, who played a ceremonious set on the festival’s final night to seal a commendable career. Even with decades of hard living behind him, Ozzy Osbourne is still the undisputed prince of darkness and can rock out like someone half his age.

Shock-rock grandfather Alice Cooper extending his hands to the skies!
On the festival’s opening night, Alice Cooper brought a thrilling display of horror theatre with a tongue in cheek attitude. For a man who is nearly 70 years old, he seemed surprisingly agile and played a fun-loving set, which made you realize you know more Alice Cooper songs than just his classics like ‘Poison’ and ‘School’s Out’.

King Diamond was up to his usual theatrics.
Denmark's very own King Diamond also showed that he is a true master of theatrics, not to mention his trademark falsetto screams. The Danish legend was greeted like a conquering hero by his fellow countrymen.
Scorpions lead singer Klaus Meine having a blast at the show
With a career spanning 50 (!!!) years, German band Scorpions rocked Copenhell like a hurricane in the obligatory thunderstorm that seems to pervade every Copenhell. Reaching 27C at times, this year’s edition was one of the hottest Copenhell’s yet, and the rain, despite leaving us soaked, was a befitting atmosphere for the Devil’s land.

Dropkick Murphys opened the festivities on the large Helviti scene with one of the better shows of this year.
Other highlights worth mentioning were Amon Amarth and their Viking set, the bluesy and brilliant Rival Sons, the raucous Abbath and his black metal mania, and the grandest punk -opener in form of Celtic punk legends Dropkick Murphys.
Megadeth's Dave Mustaine was covered behind his frizzy hair at a somewhat dissapointing show
Disappointments were few and far between, but we cannot help but to say that thrash metal legends Megadeth really delivered a lukewarm performance with no real attitude or flair. Dave Mustaine may shred like a champion, but his stage presence was completely non-existent!
This year's winners of the Battle at Smadreland. Ridiculous, but fun.
Copenhell is however so much more than just a potpourri of metal acts, both old and new. This year saw the return of the admittedly ridiculous “Smadreland” (Destruction Land) where teams could battle each other over who could smash the hell out of old car stereos and cars.
Entertainment came in many forms, including fire performers.
The beer tent has been expanded and is now a lively place with metal DJs spinning away classics. A definite highlight came was the “Fucking Sprød Svin”, a pork belly sandwich that people flocked to between sets.

More and more children seem to make their to Copenhell. Here is the winner for the most metal family.
This year permanently solidified Copenhell’s position near the very top of Denmark’s music festivals. There also seemed to be many more foreign visitors amongst the 20,000 metal lovers who turned Refshaleøen into an oasis of noise and glorious mayhem. Copenhell is a complete catharsis to many, and the metal community has never been more inclusive and dynamic. See you next year for more metal camaraderie!

Skål to another great Copenhell! See you next year, you Viking horn drinking metal maniacs!