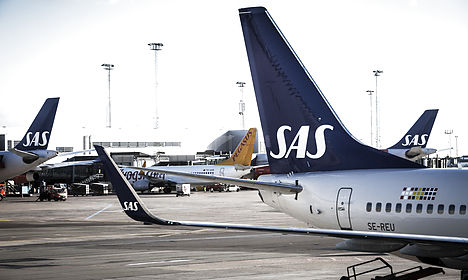 Nine flights between Copenhagen and Stockholm are cancelled on Monday. Photo: Jeppe Bjørn Vejlø/Scanpix
SAS is cancelling 230 flights on Monday after mediators failed to break a deadlock between striking Swedish pilots and the airline. But only nine of those cancellations will affect passengers in Denmark. All nine grounded flights are between Copenhagen Airport and Stockholm Arlanda.
The striking Swedish pilots began their work stoppage on Friday at 6pm after the pilots' union rejected a proposed 2.2 percent wage increase, insisting on a hike of 3.5 percent.
The pilots and employer representatives returned to the negotiating table Sunday, but talks broke down in the early hours of Monday morning.
The walkout over wages has already stranded 50,000 passengers and cost the carrier millions. A further 27,000 passengers are expected to be affected on Monday.
On Sunday, SAS cancelled 220 flights by Swedish pilots, affecting 26,000 passengers. On Friday and Saturday, another 24,000 passengers were stranded by cancelled flights.
Flights operated by Danish and Norwegian pilots are running as normal, except for those to and from Stockholm. A total of 18 flights between Oslo and the Swedish capital are cancelled on Monday.
“We apologize for any inconveniences this causes passengers. Danish flights are luckily not as affected as Swedish ones,” SAS’s Danish press chief, Mariam Skovfoged told news agency Ritzau.
For more on the Swedish pilots’ strike, see The Local Sweden.