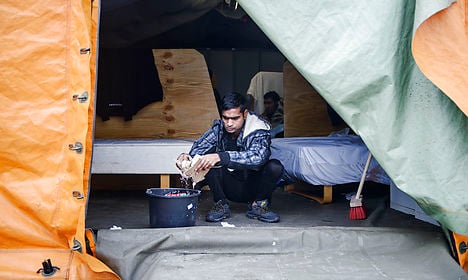 Information's report has led to calls for better inspections of Denmark's asylum centres. Pictured here is the tent camp in Thisted. Photo:
Information reported that the head of the Næstved Asylcenter, one of four tent camps erected to house asylum seekers, ran the centre with heavy-handed tactics including the use of physical force, threats and collective punishment.
Twelve residents of the tent camp told the newspaper that the man often threatened to delay their asylum applications by sending them to Centre Sandholm outside of Copenhagen, where their cases would have to start again from scratch.
Residents also filmed two incidents in which the camp’s staff used physical force against a Syrian asylum seeker, binding his legs and shoving his face into the ground.
A staff member can be heard yelling at the man in Danish: “I won’t have trouble in my camp – do you understand?”
Another clip of the same incident shows the staff members yelling at residents in English to “go away”.
Information reported that the man hired to run the asylum camp was found guilty in 2014 of using violence against residents at a children’ home where he previously worked. He was fired from that job but later hired by Langeland Municipality to run the asylum tent camp, which has space for some 400 asylum seekers.
See also: 'Denmark is forgetting itself in the wake of the refugee crisis'
After the newspaper’s report, the man was immediately put on leave but that did little to dampen the controversy.
Several politicians have vowed to hold Integration Minister Inger Støjberg accountable for the conditions in Danish asylum centres and several experts have called on Denmark to establish a new system for monitoring the centres, saying that current checks from the Danish Immigration Service (Udlændingestyrelsen) and the parliamentary ombudsman are not up to the task.
“With so many new centres it’s obvious that things will happen and that you risk hiring people who don’t know what they should do or don’t understand their role. Therefore, the [annual] inspections from the ombudsman are not enough,” Eva Singer, the head of asylum at the Danish Refugee Council, told Information.
Langeland Municipality said it was considering implementing an immediate change to hiring practices following the report.
“When we hire new employees, we get a børneattest [a ‘childhood certificate' that includes information on any previous convictions for sexual assault, child pornography or incest, ed.] but we don’t ask to see their criminal records. That hasn’t been standard procedure but it could very well be that this [incident] gives rise to making it a part of procedure,” spokeswoman Sisi Eibye told news agency Ritzau.