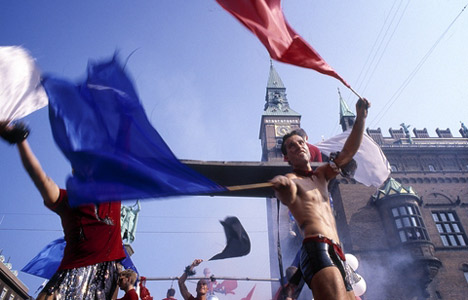 Copenhagen Pride draws big crowds in the capital every year. Photo: Christian Alsing/Copenhagen Media Center
Denmark increased its position in the so-called Rainbow Index for the second year in a row and made a significant jump from last year, when ILGA-Europe told The Local that it was “lagging behind” similar nations.
In the 2016 list, the advocacy group ranked 49 countries based on their laws pertaining to same-sex marriage, adoption, rights for transgender people, and more.
Malta came out on top, mostly due to its groundbreaking laws over the past year to protect intersex people – those born with sex characteristics that do not fit into typical notions of female and male bodies.
Belgium took second place, followed by the United Kingdom and Denmark.
The countries that performed the worst in the report were Monaco, Turkey, Armenia, Russia and Azerbaijan at the very bottom.
Click through on the image below for the full rankings
ILGA-Europe pointed to some specific reasons for Denmark’s move up the rankings.
“There was a positive decision in a case of discrimination on the grounds of gender identity at work, the first ever such decision in Denmark,” the report stated. “The Adoption Act was revised and lesbian couples’ access to fertility treatment was expanded.”
The report also praised Copenhagen for opening the first elder care home for LGBT people and pointed to the approval of gay marriage in both Greenland and the Faroe Islands.
But ILGA-Europe advocacy director Katrin Hugendubel told The Local that across the continent, “we really see a lot of complacency going on”.
“A lot of countries have stagnated at a relatively high level, but are now starting to move slightly down the rankings because other countries are moving ahead, and others that are moving backward because they are introducing limitations on rights,” she said.
“You can’t move ahead on one thing and think the job is done,” Hugendubel added. “In the EU there’s a feeling that lack of equality is only happening outside of Europe, so this is a reminder that we’re not all on the right side of history quite yet.”
ILGA-Europe said that one area Europe needs to focus on is rights for intersex individuals, including further anti-discrimination protections and establishing healthcare protocol for them, according to the report.
One of the major reasons that Malta came out on top in the latest analysis was because of its ground-breaking legislation for protections for intersex people – those born with sex characteristics that do not fit into typical notions of female and male bodies.
Last April, the country became the first to outlaw non-consensual medical interventions for intersex people.
“This is one issue that has been neglected for a long time,” said Hugendubel.
“One of the messages from this report is that countries can learn a lot from each other.”