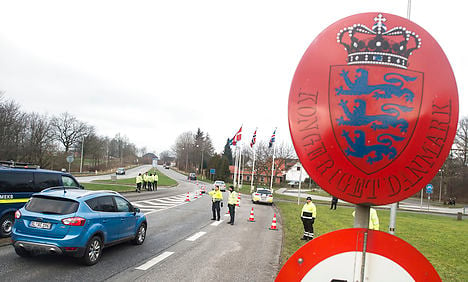 Unarmed Danish Home Guard members will take over border control duties. Photo: Claus Fisker/Scanpix
The decision, which was foreshadowed over the weekend, comes as “the Danish police face major challenges in light of the increased terror preparedness and the increased efforts at the borders”, a ministry statement said.
The Danish Home Guard will assist police in carrying out random checks at Denmark’s border with Germany, measures that were initially put in place as a temporary response to Swedish border controls but have since been extended five times.
The Home Guard troops will be unarmed during the border controls.
The ministry said that the Home Guard volunteers would be able to relieve the equivalent of 125 full-time police officers at the border. Because Denmark’s border controls, and measures put in place elsewhere in Europe, have been effective in bringing down the number of asylum seekers, an additional 40 police officers will be pulled off border duty.
See also: Danish cops overworked and undermanned
The move is meant to relieve pressure on the Danish police force, whose officers have been saying for over a year that they are stretched so thin that they are unable to carry out basic police work. New figures from the Danish National Police (Rigspolitiet) showed that officers nationwide worked some 520,000 hours of overtime in February, double the amount from January 2015.
Defence Minister Peter Christensen said that he had complete faith that the Danish Home Guard volunteers could effectively take over border control duties.
“The government and I are very pleased that the Danish Home Guard will step up and support police efforts in the current refugee and migrant situation. We are facing a very unique situation and therefore this is an important task we are asking our Home Guard to do,” he said.
The Danish Home Guard, established after World War 2, consists of roughly 15,000 active volunteers and an additional 30,000 reserve troops. In addition to providing support to the Danish Armed Forces, the volunteers also assist in search-and-rescue missions and disaster response.
In addition to the 165 officers who will be taken off of border duty, the Justice Ministry also announced that annual enrolment at the National Police College [Politiskolen] would also be increased in order to get more future officers onto the streets.