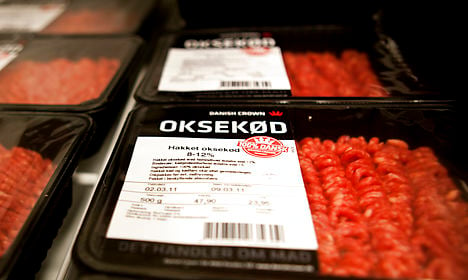 The council said that consumers should be prompted to eat less meat through a tax. Photo: Bjarke Bo Olsen/Scanpix
The council said that Danes have an ethical obligation to minimize their climate impact and that a natural place to start would be lowering their red meat consumption.
The UN Food and Agriculture Organization states that animal agriculture is responsible for 18 percent of all greenhouse gas emissions, more than the the total exhaust from all forms of transport worldwide.
Cattle alone is responsible for ten percent of all emissions and conservative estimates state that at least 43,000 litres of fresh water are needed to produce just one kilo of beef.
The Council on Ethics said that in order to live up to global environmental standards, Denmark should use a 'climate tax' to bring down the nation's meat consumption. The Council said it debated the issue for six months, focusing on whether it should be left up to consumers to make more climate-friendly choices or if government should push them in the right direction by taxing the food products that have the greatest negative impact.
While the council said that “Danes are ethically obligated to change their eating habits” it ultimately decided that simply leaving it up to consumers to lower their meat consumption “will not be effective”.
“An effective response to climate-damaging foods that will also contribute to raising awareness of climate change must be united, which requires that society sends a clear signal through regulation,” council spokesman Mickey Gjerris said in a press release.
Fourteen of the 17 members of the council support the red meat tax and the council said it would eventually like to see a tax on all food products that have a negative climate impact. For now, however, it has kept its recommendation to taxing meat from cattle, which it called the “inarguably most destructive” food for the planet.

The council's suggestion was met by immediate resistance from the Danish Agriculture and Food Council (Landbrug & Fødevarer).

“A climate tax would require a massive setup in the public sector and the food industry while the effects would be minimal,” spokesman Niels Peter Nørring told Berlingske Business, adding that climate change can only be addressed at a global level.
A spokesman for governing party Venstre said the government is very unlikely to act on the council's suggestion, calling it “a bureaucratic monster” that would have limited effect.
“Maybe it would get beef consumption to fall in Denmark, but it wouldn't do much of anything for the world's CO2 emissions,” Thomas Danielsen told broadcaster DR.
The Danish Council of Ethics in an independent body that advises parliament, ministers and other public authorities on ethical issues.