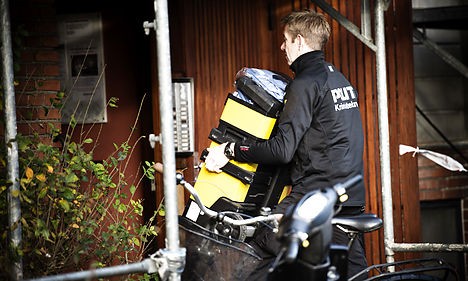 Police investigating the crime scene in November. File photo: Mathias Løvgreen Bojesen/Scanpix
Copenhagen Police said in a press release that six of the arrestees would be charged with murder or complicity in murder as well as weapons violations.
Five of the individuals have connections to the biker gang Bandidos, according to police. All nine are between the ages of 22 and 32.
See also: Police investigate triple murder in Frederiksberg
Police said that the arrests were the result of a coordinated action on the island of Zealand.
“They were arrested at eight different locations on Zealand across all police districts,” spokesman Jens Møller told news agency Ritzau.
The victims of the triple murder – young men aged 19, 23 and 24 – were shot death in their sleep at an apartment in Frederiksberg, a generally wealthy part of the Danish capital that is its own municipality despite being surrounded by Copenhagen on all sides.
Police have previously described the killings as an execution and the three victims also reportedly  reportedly had gang ties.
According to Ritzau, an additional 14 people have been charged with plotting a revenge action against the killers.
A preliminary court appearance for the nine people arrested on Monday is scheduled for Tuesday. Prosecutors have requested that it be held behind closed doors.
Url copied to clipboard!