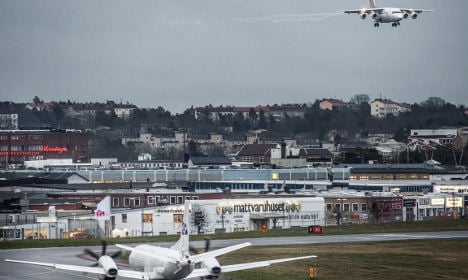 The man was flown from Bromma airport. Photo: Tomas Oneborg/SvD/TT

The 21-year-old was deported from Sweden last month, revealed the Aftonbladet tabloid on Friday, after serving the jail sentence he was handed for assaulting a woman, accompanied by two young children, when she tried to stop him from pickpocketing in the Swedish capital.

He was flown to Copenhagen, Denmark, from Bromma airport in Stockholm on March 10th by a chartered private jet at the cost of 80,700 kronor ($9,880), reported the daily newspaper.

The man, who is believed to be Algerian although it is understood his nationality has not been confirmed, had previously applied for asylum in Denmark and was therefore returned there in accordance with the EU's Dublin regulations that migrants should be registered in the first country they arrive in.

Three guards from the Swedish prison service were on board the flight, reported Aftonbladet.

According to their statements the man violently resisted when he was taken from the prison cell, but remained calm while he was taken on board the plane and for the remainder of the journey.

It is rare for Swedish authorities to charter aircraft for short-distance journeys within Scandinavia. Out of 300 such deportation flights the prison service carried out in 2014 and 2015 none went to Copenhagen, only one went to Helsinki and two to Oslo.

“It is unusual, it doesn't happen every other day, but occasionally happens for security reasons,” Johan Mellbring, head of transportation at the Swedish Prison and Probation Service, told Aftonbladet.

“Of course it's cheaper to go by car than charter a flight. But if you're doing long drives with people who have a rowdy background, you have to think about what consequences it would get on long car journeys,” he said.

Sweden's interior minister Anders Ygeman suggested earlier this year that authorities could be forced to charter aircraft to send back as many as 80,000 rejected asylum seekers in the coming years.