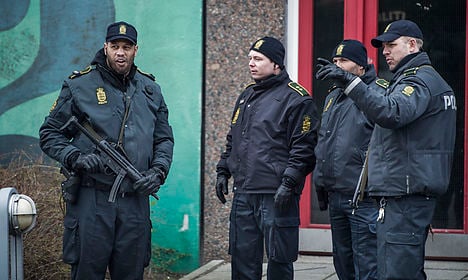 Police were out in large numbers at a residential area in the suburb of Ishøj on Thursday. Photo: Asger Ladefoged/Scanpix
“The arrests took place as part of the efforts against people who are recruited to terror groups in war-torn areas in Syria and northern Iraq and on the basis of cooperation between authorities involved in the coordinated action against foreign fighters,” Copenhagen Police wrote in a press release.
All four were suspected of breaking Denmark's terrorism law while in Syria, police said.
Under Danish terrorism law, “letting oneself be recruited to commit acts of (terrorism)” is punishable with up to six years in jail.
Police said that ammunition and weapons were found at one address, but that the address belonged to someone who is has known gang ties.
“We have found some weapons and some ammunition. Now we will see if that has anything to do with these people,” police spokesman Poul Kjeldsen said at a press conference.
In the Vejledalen neighbourhood in Copenhagen's southwest suburb of Ishøj, janitor Michael Harsfort said he was working when “suddenly two big cars came in at high speed”.
“Out poured police officers in camouflage gear with machine guns,” he told broadcaster TV 2.
Media reports said that one of the apartments searched in another area was linked to a 27-year-old man whose name appeared in leaked documents that were given to Britain's Sky News, containing information on jihadists who have joined Isis.
Sky reported last month that a disillusioned former Isis member had given the channel tens of thousands of documents containing the names, addresses, phone numbers and family contacts of those joining the group.
On Friday, the four individuals will face a preliminary hearing behind so-called ‘double locked doors’, meaning that the details of the case will be kept from the public.
Justice Minister Søren Pind wrote on Facebook that the arrests were an important step in Denmark's efforts to hold foreign fighters accountable upon their return to the country.

“We know that people who have fought for IS in Syria or Iraq can present a particular security threat against Denmark,” Pind wrote.

According to a recently-released report, 62 former foreign fighters are now believed to be back in Denmark. That report, from the Hague-based International Centre for Counter-Terrorism, estimated that around 4,000 Europeans have travelled to Syria and Iraq to join extremist groups as foreign fighters.

So far only one returning Syria fighter in Denmark has been charged with joining a terrorist organisation.