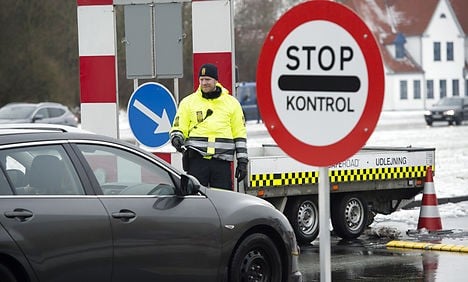 A Danish police officer stops vehicles in the border town of Kruså. Photo: Claus Fisker/Scanpix
The new extension means that the checks at the German border will remain in place until May 3rd, at which time the government will once again reconsider the measures.
In announcing the 30-day extension, the Integration Ministry said the measures were necessary in light of the continued refugee pressure on Europe’s outer borders and Sweden’s mandatory ID checks for everyone leaving Denmark.
“As long as asylum seekers without the correct ID papers cannot travel on to Sweden, there is still a serious risk that many refugees and migrants get stranded here. Therefore it is necessary to extend the border controls so we ensure that large groups of refugees and migrants don’t accumulate here in Denmark,” Integration Minister Inger Støjberg said in a ministry press release.
Støjberg also pointed to the “large groups of unregistered asylum seekers in Germany who might try to travel on to Denmark and our Nordic neighbours” and said that numbers are likely to increase with the arrival of warmer spring weather.
According to the Danish National Police (Rigspolitiet), over 470,000 people have been checked at road, rail and sea borders since controls began in January. Some 990 people have been denied entry to Denmark and 123 charged with human trafficking.
The border controls have been effective in dramatically decreasing the number of asylum claims in Denmark. Last week there were just 35 asylum seekers, the lowest weekly total since the measures were put in place.
Denmark received 21,000 asylum applications in 2015.