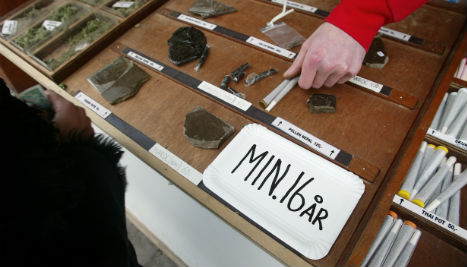 A selection of different types of hashish on sale at one of the stalls in Christiania. Photo: Carl Redhead/Scanpix
The opposition Social Democrats and the populist Danish People’s Party have proposed that Denmark's police mount a massive operation to clear out the dealers who operate in the area once and for all.
“It makes no sense for us to have places in Denmark where law and order is not respected,” Trine Bramsen, spokesperson for the Social Democrats, told Danish state broadcaster DR. “We want to ensure that we can put an end to the open cannabis trade that takes place every day in Christiania.”
Justice Minister Søren Pind did not even bother to make an official statement on the proposal, instead simply tweeting sarcastically: “So, during times of terror and border controls, Danish police should clean up Christiania? Yes, really!”.
Jan E Jørgensen, Pind's colleague in the ruling Liberal Party, told Danish newspaper Ekstra Bladet that such a major operation was impractical at a time when police were already stretched to the limits.
“I think that both parties can work out that it would require a massive police presence in Christiania at all hours,” he said. “I don’t know where they think we should take the officers from — whether it’s from border control, fighting terrorism, or surveillance of the synagogue.”
The Christiania area is notorious for its Pusher Street, where cannabis is sold freely, with little more than the occasional raid from local police.
Christiania was created in 1971, when radical Danes squatted a former military barracks in an attempt to create a 'free town', independent of state authority.
The neighbourhood has enjoyed special status since in 1989, with the state rather that Copenhagen municipality having authority over it.