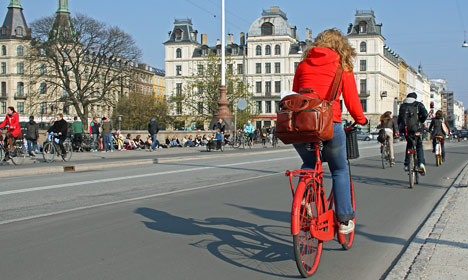 Looks like it will be awhile before you can put the coat away for the year. Photo: Colourbox
The Danish Meteorology Institute (DMI) called for Monday temperatures to hit as high as 12C in northern Jutland, while the southern part of the country would see highs between 7-10C. The Copenhagen area and the island of Bornholm, however, will not be as lucky as highs there were expected to peak at 5C.
DMI’s national six-day forecast predicted double-digit highs on Tuesday, Wednesday and Friday but overnight lows will continue to dip below freezing throughout the week.
Looking ahead toward Easter, it might be a good idea to keep the heavy coats, hats and gloves within arm’s reach.
“When we reach Easter week, a low-pressure system will build over northeast Europe. That means that colder air will move over Scandinavia. We’ll feel that through the course of the week, during which we will likely receive a low-pressure system with rain and wind over the country from the west,” DMI’s Martin Lindberg said in an extended forecast.
“Easter weekend looks like it will begin with instable and cooler weather but when the fronts with rain and wind have passed us, we could also have a day or two with more stable weather and maybe see the sun. When and who the sun will visit is a bit less certain,” he added.
Despite that rather grim forecast, spring has officially sprung in Denmark, if only technically. The nation uses the meteorological definition of seasons, meaning that spring officially runs from March 1st through May 30th as opposed to beginning on the spring equinox and ending on the summer solstice as in some other countries.