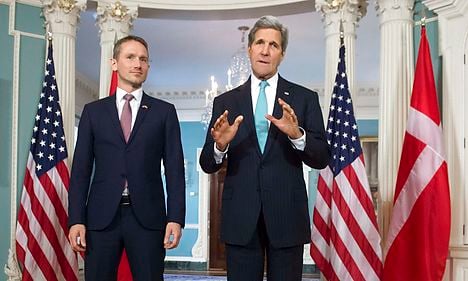 Jensen and Kerry addressing the media prior to their meeting at the US State Department on Wednesday. Photo: Saul Loeb/Scanpix
Hosting Danish Foreign Minister Kristian Jensen in Washington, Kerry thanked the Nordic nation for its recent commitment to send F-16 fighter jets and 400 soldiers including 60 special operations forces into Syria and Iraq.
“Denmark is a country that really, as we say in America, hits way above its weight,” Kerry said.
PM Lars Løkke Rasmussen’s decision to send jets and troops into Syria, which is expected to formally pass parliament next month, represents a significant expansion of Denmark’s role in the US-led coalition’s efforts to fight the terrorist group alternately known as Islamic State, Isis or Daesh.
See also: Denmark to send F-16s and troops into Syria
“We are making significant gains in that fight everyday now. Denmark is front and centre in that fight and we are very, very grateful for that,” Kerry said.
See Kerry and Jensen's remarks here. Story continues below:
Denmark has thus far confined its efforts to northern Iraq, where its F-16s flew 547 missions and dropped 503 bombs. During his Wednesday meeting with Kerry, Jensen said it was vital to take the fight to the terrorists where it’s most needed.
“We know the fight against Daesh is going to be hard and we need to fight them where they are,” the Danish minister said.
Speaking to the Washington Post, Jensen said it's important for Denmark to remain an active part of the US-led coalition.
“We have seen what happens to a small country with aggressive neighbours. We live with Russia as our neighbour,” he said. “We know that international solidarity is important. And we have also been faced with the terrible horror of terror. So we know that if we don’t fight Daesh, we are at risk of having the terrorists come to us.”
In addition to the coalition’s fight against Isis, Jensen and Kerry also discussed the TTIP trade agreement, the security situation in the Ukraine, Arctic issues and Europe’s refugee crisis.
Of the latter, Kerry said the US is closely following the situation.
“I want our friends in Europe to understand that we in America are not sitting here believing that we are somehow immune to the impacts of what is happening in Europe today. We understand how deep this crisis runs with respect to the flow of migrants, the possibilities of terror and we already know our friends have been hit in Europe,” he told reporters.
While in Washington, Jensen accused German Chancellor Angela Merkel of having underestimated the scope of the refugee influx.
See also: Denmark: Germany's Merkel underestimated refugee crisis
“I think that Merkel has been surprised by the number of refugees coming to Germany. She thought this was a crisis that would fade out,” Jensen said.
He also accused Merkel of acting unilaterally rather than consulting Denmark and the other EU nations.
“Sometimes she perhaps should remember to inform and listen because even given how strong she can be and how large and strong Germany is, they can't decide for the rest of the 27,” he said.