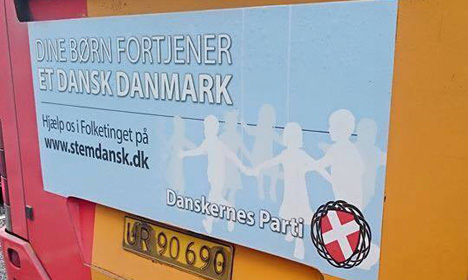 The ads, which say "Your children deserve a Danish Denmark", set off a firestorm of criticism. Photo: Orla Mann/Facebook
Movia, which last year saw itself embroiled in controversy after dropping ads urging people to boycott products from Israeli settlements from Copenhagen buses, is in hot water once again.
This time the controversy surrounds Movia’s decision to accept an advertisement from the nationalist Danes’ Party (Danskernes Parti), which was founded by a former Neo-Nazi and wants to see all non-Western immigrants kicked out of Denmark.
The ads are an attempt to garner enough signatures for the party to be eligible for the next election. They show the white silhouettes of playing children with the slogan “Your children deserve a Danish Denmark.”
The decision to allow the ads on four Copenhagen buses led to a flood of angry comments on Movia’s Facebook page, especially seen in light of the company’s decision to remove advertisements from 35 buses in the capital region that urged people to boycott products from Israeli settlements.
Those ads pictured two women beside the quote: “Our conscience is clean! We neither buy products from the Israeli settlements nor invest in the settlement industry.”
See also: Israeli group credited for Copenhagen bus ad removal
Numerous Facebook users expressed their displeasure with Movia, with some posting images of the bus ads replaced by images of Adolf Hitler and others saying that the company’s acceptance of the ads was tantamount to telling non-white customers that they are not welcome on city buses.
The company defended its decision by saying there was nothing illegal about the Danes' Party ads.
“Movia closely considered whether the advertisements could be shown on our buses in connection to our advertising rules. Movia generally allows political advertisements and particularly in the run-up to an election there are many campaigns [on buses] for political parties,” a Facebook statement read.
“We understand that some people find an advertisement for the Danes’ Party disagreeable, just as that can be the case with advertisements for other parties. Movia cannot on the basis of our advertising rules reject an ad for the Danes’ Party, as we generally allow ads for political parties and the advertisement in itself is not illegal,” it continued.
Url copied to clipboard!