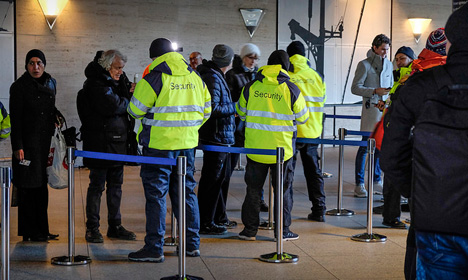 The security checks at Copenhagen Airport will run through the end of March - at least. Photo: News Øresund/Flickr
Sweden’s border controls, introduced in November and extended to passenger ID checks at ferry terminals and Copenhagen Airport's train station at the turn of the year, will not be going away any time soon.
Johansson announced that the measures have been extended for an additional 30 days.
Despite the country seeing a sharp drop in asylum numbers since implementing the controls, Johansson said Europe’s refugee crisis was far from over, pointing to indications that around a million refugees are expected to travel to the continent in the coming year.
“Almost 10 times more have arrived from Turkey to Greece in January this year compared to January last year. And we're in a situation where our asylum centres are full,” said Johansson.
“If we remain the most generous refugee country in the whole of the EU: what happens then?”
Sweden received 163,000 asylum applications in 2015, compared to 21,000 in Denmark.
Denmark recently extended its own temporary controls at the German border, saying they continue to be necessary as long as “there is still a serious risk that a very large number of illegal immigrants will be stranded in Denmark when they are prevented from entering Sweden without the necessary ID papers,” according to an Immigration Ministry statement.
The latest ten-day extension will expire on Friday, but is widely expected to be extended again.