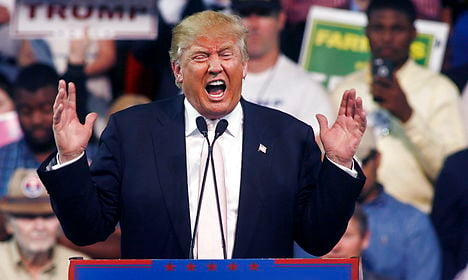 Donald Trump won seven states on Super Tuesday. Photo: Philip Sears/Scanpix
One of the many Danes to weigh in on the results was Foreign Minister Kristian Jensen, who painted Tuesday’s big winner on the Republican side, brash businessman Donald Trump, as a unpredictable wild card who could be difficult to work with should be become president.
“Trump is really like pulling a raffle ticket – and we’d pull a new one every morning. It would be an amazing roller coaster ride if Trump wins,” Jensen told broadcaster DR.
Several Danish politicians have previously slammed Trump for some of his more outrageous statements and even warned that if he were to assume the White House, Denmark would have to reconsider its relationship with the United States.
See also: A President Trump could affect Denmark's ties to US
In his analysis of the Super Tuesday results, in which Trump won seven of 11 states, Jensen said that if Trump is sworn in as the 45th president, it would definitely impact the two nations’ relationship.
“It would have a major impact on the US’s stability and cooperation. Because Trump is completely unpredictable. It would be much, much more difficult to work with the US. Because you’d never know what he will believe tomorrow,” the foreign minister said.
“He changes opinions like the rest of us change underwear,” Jensen added.
Jensen said that Denmark would be much more comfortable if Tuesday’s winner on the Democratic side, Hillary Clinton, is the Americans’ choice come November.
“There is no doubt that it would be much easier with Hillary in the White House than Donald Trump,” he said.
“We know Hillary. We’ve known her as secretary of state and as a politician for many years. We know what she stood for when she was in the White House with her husband,” Jensen said.