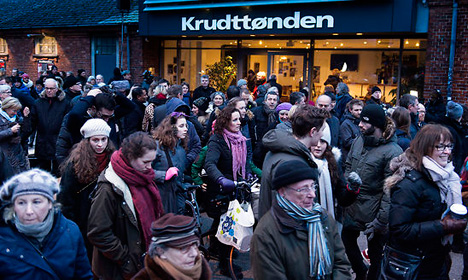 Danes paid tribute to the terror victims on the one-year anniversary of the shootings last month. Photo: Claus Bech/Scanpix
“We have carried out an evaluation of the material related to him, just as we have done with the other four who are charged in the case, and have determined that there are no grounds for going further with him,” prosecutor Bo Bjerregaard told TV2 News.
The 18-year-old man has sat in police custody for nearly a year, leading his lawyer to tell broadcaster DR that he would seek compensation.
The man himself told TV2 that his arrest “ruined [his] whole life”.
“I haven’t had a job, I lost my apprenticeship and right now I’m not doing anything. I need to start all over with everything and that isn’t particularly easy when you’ve been sitting in jail for nearly a year,” he said.
The 19-year-old is one of five men who were charged for assisting El-Hussein in various ways leading up to his attacks on February 14-15 in which he opened fire on a cultural cafe hosting a free speech debate, killing one, and then shot and killed a volunteer security guard outside of Copenhagen’s Great Synagogue. El-Hussein was then killed by police.
The trial against the other four men is scheduled to get underway on March 10th.