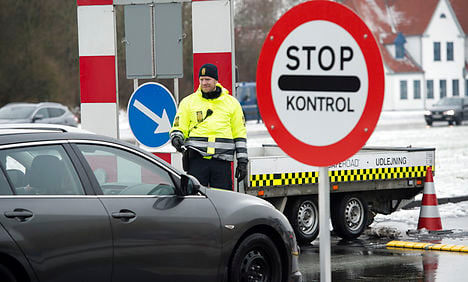 A Danish police officer stops vehicles in the border town of Kruså. Photo: Claus Fisker/Scanpix
The move marks the third time that the Danish government has extended the measures, which were initially put in place on January 4th.
The Danish government’s extension came as Sweden said there is “no deadline” on when it will stop the ID checks it put into place in January for all arrivals from Denmark and a statement from the Danish Immigration Ministry said its own decision was a direct result of the Swedish checks.
“The assessment is that without border controls at the Danish-German border there is still a serious risk that a very large number of illegal immigrants will be stranded in Denmark when they are prevented from entering Sweden without the necessary ID papers,” the statement read.
Mostly fleeing war and instability in the Middle East, more than 110,000 people have arrived in Europe by sea since the beginning of the year. About 44 percent of the arrivals are from Syria, according to the UN High Commission for Refugees.
“Against this background and on the basis of continued identity checks at the Swedish border, the government today [Tuesday] decided to extend the Danish border controls,” the ministry said.
Statistics from the Danish National Police (Rigspolitiet) obtained by TV2 showed on Tuesday that 230,767 people have been stopped by Danish police at the German border. Of those, 736 were denied entry and 109 were charged with human smuggling.
Denmark has previously extended its border checks twice by 20 days, but the government said on Tuesday that the new extension will last just ten days before being reevaluated.
Schengen rules state that a member nation can implement border controls for an initial ten-day period and then be extended for 30 days at a time until two months have passed. After that time, the controls can be extended by 30-day periods over the next six months.
The Danish government’s announcement came as a spokeswoman for Europe’s migration commissioner, Dimitris Avramopoulos, called on Denmark to end the border measures “as soon as possible”.
“Temporary border controls on the inner borders should remain extraordinary and proportional. The ultimate goal must be to return to a normal situation as soon as possible for all affected member states,” Tove Ernst wrote in a statement to news agency Ritzau.
Swedish infrastructure minister Anna Johansson told Sweden’s Sydsvenskan newspaper that her government will not drop its ID checks “until it is sure that the number of asylum seekers won’t rise as soon as winter is over”.
Denmark received more than 21,000 asylum applications in 2015, a 44 percent jump from 2014, though significantly fewer than its neighbour, Sweden.
Sweden received 163,000 asylum applications in 2015, but it has also seen the number of migrants arrivals fall sharply since the start of random border checks on 12 November. Between 600 and 700 asylum applications per week are currently being registered, compared with 10,000 in late October.