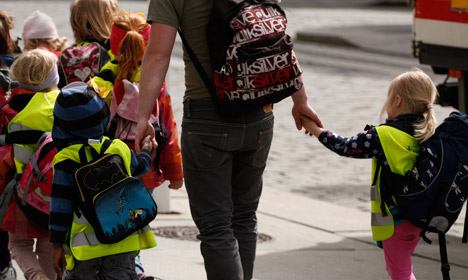 Refugees could help with integrating children, but some worry about relaxing background check requirements. Photo: Colourbox
Danish nurseries, daycare centres and after-school centres would benefit from having adult refugees who can relate to child refugees who have recently arrived in the country, the Danish Union of Early Childhood and Youth Educators (BUPL) said on Wednesday.
Therefore, the group is urging the government to look at relaxing the rules on who is allowed to work with children.
In Denmark, individuals who come in direct contact with children under the age of 15 may be required to obtain a so-called childhood certificate (børneattest). The certificate includes information on any previous convictions for sexual assault, child pornography or incest.
BUPL chairwoman Elisa Bergmann has proposed relaxing the requirement for refugees, who often cannot obtain the paperwork from their home countries needed in order to get a certificate issued.
“In the long term, we will need refugees who are trained educators or youth workers, or who are able to perform the role of nursery assistant. We need that in order to integrate the refugee children,” she told Ritzau.
Culture Minister Bertel Haarder is responsible for the certificate legislation and he said he is open to the idea of relaxing the rules for refugees.
While BUPL supports the idea of relaxing the rules, she stressed the need to be “as safe as possible” when letting people work in the nation’s daycare institutions without the required background check.
“But we are in an extraordinary situation in which there are people coming to this country for whom we cannot get the needed information on. One can ask themselves how long these people should be kept out because they can’t show the right papers,” Bergmann said.
BUPL suggested that any refugees placed in the institutions should be partnered with a trained pedagogue.
The Danish People’s Party (DF) was very critical of the proposal, saying it would put children at risk and be a form of discrimination against Danish workers who would still be required to submit to a background check and provide the necessary certificate.
“As I read it, the government is preparing to let refugees be employed in daycare institutions without the child certificate. I think it is completely unheard of that one would even consider relaxing these rules, which are made to protect children against attacks,” DF spokeswoman Pernille Bendixen told Avisen.dk.
In a written response to Bendixen, Haarder stressed that with or without the certificate, there should always be “a comprehensive and concrete evaluation of whether an individual is suited to working with children” before being employed by an institution.