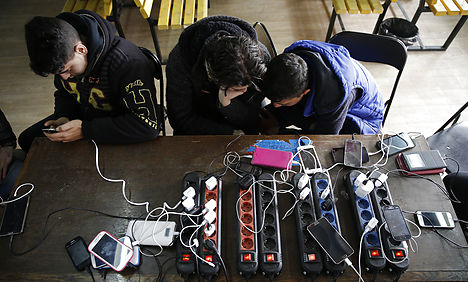 Police now say they will get the phones back to asylum seekers quicker. Photo: MARKO DJURICA/Scanpix
Police officers are taking the phones in an attempt to verify the identity and home country of the asylum seekers, a Danish National Police spokesman confirmed.
“If you come to the country and say that you are from Syria but don’t have anything but your blank expression to prove it, then mobile phones are the best way to ensure that you’re telling the truth or whether all of your calls turn out to be to Ghana,” Richard Østerlund la Cour told Politiken.
He said that all of the minors get their phones back after police have confirmed their identities, but Politiken reported that some minors have been without their phones for months and left unable to contact their family members.
After the publication of Politiken’s report on Tuesday morning, a number of politicians called on police to speed up the process. La Cour later told broadcaster DR that police are also sometimes taking the phones of adult asylum seekers as well and there is therefore a backlog causing delays in returning them.
“Everyone is aware of the situation in the second half of 2015, when we received more asylum seekers than ever before and that has challenged us in terms of both resources and capacity,” he said.
Over 2,000 unaccompanied minors sought asylum in Denmark last year, compared to the historic yearly average of 250.
La Cour said the Danish National Police were “aware” of the problem and working on getting the phones back to asylum seekers “faster than we have thus far”.
According to Politiken's report, many of the minors have been without their phones for upwards of one month. In one case, the phone of an underage asylum seeker was held for six months but police found evidence on the phone to tie him to a human smuggling case.
Save the Children Denmark (Red Barnet) criticized the police for holding on to the phones of minors for so long.
“One makes the youths, who are already so vulnerable, even more marginalized by taking their phones. They lose their photos, emails, and the numbers for their family and friends and are suddenly left alone,” the organization’s senior consultant Gitte Jakobsen said.
The phone confiscations are not directly tied to Denmark’s recently-passed – and much-discussed –  ‘jewellery law’ but rather under existing rules that allow police to take the phones if they are “assumed to be of importance for establishing a foreigner’s identity”.