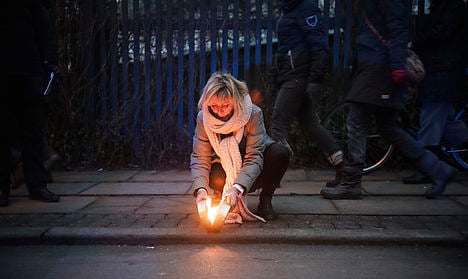 1,800 candles were used to show that Danes "insist on living a peaceful life". Photo: Ólafur Steinar Gestsson/Scanpix
The Danish capital honoured the two victims of a gunman’s twin attacks under tight security, as Danish Prime Minister Lars Løkke Rasmussen left flowers outside the cultural centre and the synagogue targeted on February 14, 2015 by Omar El-Hussein, a 22-year-old Dane of Palestinian origin.
An emotional day closed after dark when some 2,000 people walked in silence along a route between the two locations attacked, lit by a chain of 1,800 candles.
SEE FULL PHOTO GALLERY HERE
“We must stand up and fight against hatred and violence,” said Harold Ryan, a retired journalist who joined the 3.6-kilometre (2.2-mile) march with his wife.
Earlier in the day, Rasmussen warned that Denmark still faces a “serious terror threat” but said that “the Danes have shown that we insist on living our peaceful life.”
“We must live in harmony… must protect democracy and tradition which we have had for years in Denmark, to live side by side even if we believe in a different God,” the PM told reporters.
Read more: Danes honour victims on terror anniversary
On Sunday’s day of commemoration, the attacks two victims were in focus. Danish filmmaker Finn Nørgaard, 55, was shot and killed at the Krudttønden cultural centre where El-Hussein opened fire on a conference on free speech featuring Swedish cartoonist Lars Vilks — reviled by Islamists for portraying the Prophet Mohammed as a dog in 2007. Three police officers were also wounded at the centre.
After managing to escape, the assailant shot dead a 37-year-old Jewish security guard, Dan Uzan, in front of a synagogue, also wounding two police officers.
Click on the photo below for a full gallery from Sunday's events. Danes gather outside of the Krudttønden cultural centre, the site of the first shooting. Photo: Claus Bech/Scanpix