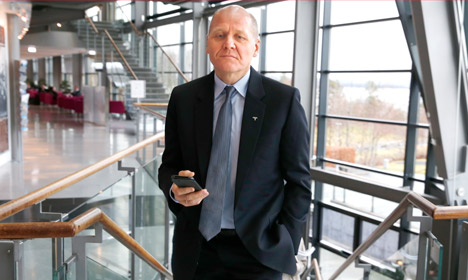 Telenor chief executive Sigve Brekke presented the company's 2015 results in Oslo on Wednesday. Photo: Vidar Ruud / NTB scanpix
Telenor's share price slumped on the Oslo stock exchange, shedding 7.5 percent in early afternoon trading after the group's fourth quarter earnings came in below analysts' forecasts.
Last year Telenor saw its net profit plunge by 62 percent for the full-year, to 3.4 billion kroner (€353 million, $398 million), with a loss of 2.1 billion kroner in the fourth quarter alone.
Gross margins on earnings before taxes, depreciation and amortisation (EBITDA) remained nonetheless stable, at 34.5 percent.
For 2016, the group said it expected its EBITDA margin to land at between 33 and 34 percent and forecast organic growth of two to four percent, after registering growth of 4.7 percent last year, which boosted sales to 128.2 billion kroner.
“We are … entering 2016 with increased competition in some of our key markets,” chief executive Sigve Brekke said in a statement.
In the fourth quarter, Telenor registered an impairment loss of 2.1 billion kroner in Denmark.
The country has been the source of recurring problems for Telenor: earnings are regularly in the red and the company had to axe plans to merge its Danish subsidiary with its Swedish rival TeliaSonera in September because of the risk of anti-trust issues.
The Danish impairment loss comes on the heels of a 5.4 billion kroner impairment loss Telenor registered in the third quarter for problems related to its 33-percent stake in Russian subsidiary Vimpelcom, which has been accused of corruption in Uzbekistan.
VimpelCom is being investigated in the United States and the Netherlands for alleged kickbacks paid to a company linked to the daughter of the Uzbek president, in exchange for licenses in the country in the 2000s.
Telenor has denied any wrongdoing. It has said it wants to offload its stake in the Russian operator but there are few potential buyers, according to analysts.
Meanwhile in Thailand, Malaysia and its home market Norway, which accounts for a quarter of Telenor's sales, margins are under pressure amid rife competition.
The group, which is 54-percent owned by the Norwegian state, now counts more than 200 million subscribers in a dozen countries in Asia and Europe. 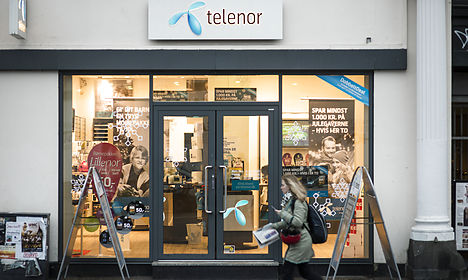 TELENOR
TeliaSonera and Telenor to merge in Denmark

The merger would create a new giant in the Danish telecom market. Photo: Christian Lindgren/Scanpix
Norwegian telecom operator Telenor and Swedish-Finnish rival TeliaSonera on Wednesday said they would merge their operations in Denmark, which last week was deemed the world's most connected country.
Each group would hold 50 percent in a joint venture that would have a 40 percent market share and annual revenue of over nine billion kroner (1.2 billion euros, $1.5 billion), the two companies said.
"The need for consolidation in the Danish telecom market has been apparent for a while as operators face continued pressure on revenues and profitability, limiting the room for investments and innovation," Telenor said in a statement.
The Nordic countries have some of the world's most mature telecom markets, and Denmark last week overtook South Korea as the world's most connected country in the International Telecommunications Union's ICT development index. The survey takes into account Internet and mobile phone access and use, and the population's competence with the technology.
The merger would create Denmark's biggest mobile carrier by number of customers, just ahead of incumbent TDC, which holds a 39 percent market share.
Denmark has long been a weak spot for the otherwise profitable Telenor, racking up an operating loss of 86 million Norwegian kroner (9.9 million euros, $12.2 million) in the first nine months of the year.
TeliaSonera said the deal would create "significant synergy potential".
The transaction required approval from the EU Commission and was expected to close in 2015, the companies said.
In Norway, another mature market, TeliaSonera continues to compete with Telenor and has sought to buy the assets of Sweden's Tele2, but the country's competition watchdog has said it may block the deal, which would give the new group a 40 percent market share.
Telenor and Sweden's Telia aborted a merger in 1999 after disagreement over, among other issues, where to base the group's head office for mobile telephony, prompting the Swedish communications minister to accuse Norway of being "the last Soviet state".
SHOW COMMENTS
Url copied to clipboard!