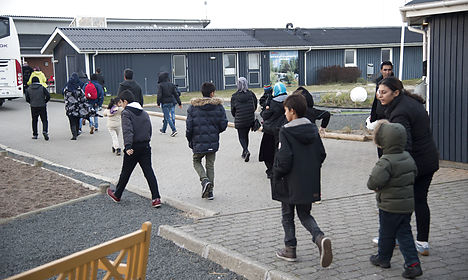 Refugees arrive at an asylum centre in Hvide Sande. Photo: Tommy Kofoed
Denmark has been in damage control mode as of late in an effort to counter the negative attention the Nordic nation received when its parliament overwhelmingly approved a migrant bill that allows for the confiscation of valuables and makes some refugees wait three years before they can apply for family reunifications.
After the bill was heavily criticized by human rights groups and the international media, Danish embassies began a counter-information campaign aimed at dispelling the myth that the nation has turned cold-hearted toward refugees and asylum seekers.
See also: Denmark faces backlash over 'despicable' 'jewellery law'
The Danish Embassy in the US took to social media to share ‘facts about Denmark and the refugee crisis in Europe’, tweeting that Denmark was one of the ten EU member states that received the most asylum seekers per capita in 2015 and that the 21,300 asylum seekers accepted by Denmark would be the equivalent of the United States receiving 1.2 million refugees.

Facts about Denmark & the refugee crisis in Europe: pic.twitter.com/nQ85JUzRsX

Denmark has also belatedly pointed to laws on the books in other countries, including neighbours Germany, Sweden and Norway, that allow for the confiscation of valuables from refugees.
But the international criticism keeps coming.
In an editorial published in Tuesday’s edition of the International New York Times, Denmark was singled out for the strategy it has adopted to limit the number of asylum seekers.
“In what sometimes seems to be a race to the bottom among European countries to see who can be the least welcoming to asylum seekers, Denmark last week adopted an appallingly cruel strategy: stealing from people fleeing war. A law approved by the Danish legislators allows immigration authorities to seize valuable items, including jewellery and cash, to offset the cost of resettling them,” the Times editorial board wrote.
The editorial went on to criticize the government’s publication of advertisements in Lebanese newspapers that told would-be asylum seekers that benefits had been slashed and that those rejected for asylum would be sent out of the country post haste.
The paper did acknowledge Denmark’s contribution to Europe’s biggest refugee crisis sin decades, but accused the country of not keeping its head cool.
“Like many other Western nations, [Denmark] is panicking about the costs and burdens of the largest displacement crisis since World War II,” it said.
After chastising US for not doing its fair share, the Times called on Denmark to return to its historical position as a humanitarian leader.
“Denmark needs to be a leader in handling this crisis. It was the first nation to ratify the 1951 United Nations Refugee Convention, a pillar of international law. With every act of selfishness, nations like Denmark are rendering the promise of the refugee convention increasingly hollow,” the editorial concluded.
The full New York Times editorial can be read here.