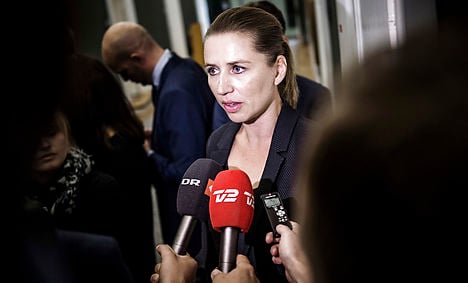 Social Democrats leader Mette Frederiksen. Photo Thomas Lekfeldt/Scanpix
A Megafon poll showed that the Social Democrats plummeted seven percentage points, going from 26.3 percent support in November to just 19.3 percent this week.
The drop was so significant that Megafon conducted an extra poll just to make sure the numbers hadn’t lied.
“The poll shows an historic large drop in support for the Social Democrats. The drop is so big that we have to go all the way back to 1998 to see anything similar,” Megafon CEO Asger Nielsen told TV2.
Measured by parliamentary seats, the poll would mean that the Social Democrats would go from their current 47 down to 34.
The reason for the drop in support was clear. Voters rejected the party’s hard lurch to the right on immigration and asylum policies.
“We asked everyone who left the Social Democrats in the poll to explain why and when I looked at all of the explanations, for 80 percent of them the refugee situation was the clear reason,” Nielsen told Politiken.
Earlier this week, the Social Democrats were the only ‘red bloc’ party to vote in favour of Denmark’s controversial asylum package, which among other things allows for the confiscation of cash and valuables from refugees and will make some refugees wait three years before they can even apply to bring their families to Denmark.
Only three Social Democrats bucked the party line and voted against the bill.
The Social Democrats’ loss was primarily the Social Liberals’ (Radikale) and The Alternative’s gain. The former received 8.5 percent support, nearly doubling its level from the June 2015 election while the latter jumped to 9.3 percent support. That makes The Alternative the second-largest party within the ‘red bloc’ party despite only being around since 2013 and making its first general election appearance in June.
While the Megafon poll was the talk of the Danish political world on Friday, a poll conducted for Børsen by Greens showed that the Social Democrats only feel from 25.3 percent to 24.5 percent.