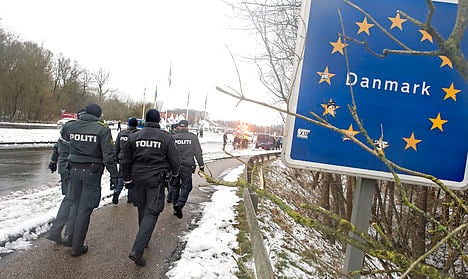 Denmark, Norway, Sweden and Finland have all seen their asylum numbers decrease. Photo: Claus Fisker/Scanpix
The Danish government implemented spot checks on its border with Germany on January 4, the same day neighbouring Sweden began requiring photo identification from all passengers on trains, buses and ferries from Denmark to stem the migrant influx.
After rising slightly for two days, the number of asylum seekers has steadily decreased from a daily average of about 100 to just 17 on Wednesday, according to the Danish Immigration Service (Udlændingestyrelsen).
Denmark's integration ministry and the Danish Red Cross, which runs most of the country's asylum centres, declined to comment on whether the fall was due to the border controls.
See also: Asylum cases yo-yo after Danish border checks
“There may be fluctuations, especially during winter when the number typically falls,” the head of the asylum department at the Danish Red Cross, Anne la Cour Vagen, told the daily Politiken.
“But we didn't see that before Christmas and it's very hard to know why we have a low number right now,” she added.
Norway received just over 200 asylum applications in the first two weeks of 2016, down from a peak of 2,500 per week in November, according to the Norwegian Directorate of Immigration (UDI).
Oslo introduced spot checks on its border with Sweden and on all incoming ferry arrivals on November 30 and has also begun sending back migrants entering the country from Russia if they have valid Russian residence permits or visas.
See also: Migrants: Norway 'sending us to death' in Russia
Sweden, until recently known for its generous asylum policies, has seen numbers drop from a weekly peak of nearly 10,000 in October to current number of only about 100 per day, according to the Swedish Migration Agency (Migrationsverket).
“Last fall we found ourselves in a situation were it was unsustainable and we had to take measures to reduce the number of asylum applications,” said Swedish Prime Minister Stefan Löfven.
Sweden introduced border controls on November 12 and the number of arrivals fell, and then dropped even further after migrants, beginning in January, were forced to show ID on trains, buses and ferries entering the country.
See also: Sweden checks change refugee flow around EU
The Scandinavian country was among the European countries that received the largest number of migrants in 2015 in absolute numbers as well as per capita, with 163,000 asylum applications recorded in the country, which has a population of 9.6 million people.
Finland received 615 asylum seekers between January 4 and January 20, according to the Finnish Immigration Service. The number began to drop in November, from over 800 a week before Sweden introduced its border controls.
Indeed, the European Union's cherished passport-free Schengen area has come under huge strain, as many countries have reintroduced border controls to deal with the flow of migrants trying to reach the wealthy Nordic region from the main landing point in Greece.