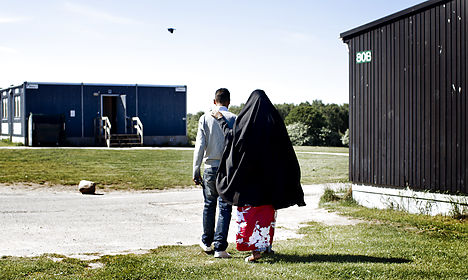 Denmark's asylum policies have garnered a lot of international attention, but the government says there is a lot of misinformation. Photo: Bax Lindhardt/Scanpix
In December, the Danish government presented a law that would allow authorities to search asylum seekers and their luggage in order to find valuables that could be confiscated in order to cover the expenses of their initial stay in Denmark.
The United Nations and others have harshly condemned the plan, especially as it follows the government’s numerous moves against refugees seeking asylum since taking power last year. Some went as far as to compare the country’s measures to the ones carried out against Jews in Nazi Germany.
What once was a country that could pride itself of its openness towards immigration, has been making numerous attempts to make itself a “less attractive” destination for asylum seekers, from placing ads in Lebanese newspapers about slashed welfare benefits for asylum seekers to proposing revisions to the 1951 UN treaty governing the rights of asylum seekers, a treaty Denmark was the first country to sign.
In a recent interview with CNN, a spokesman for right-of-centre government party Venstre, Jakob Ellemann-Jensen, defended the bill by claiming it would be “outrageous” to think that Denmark would seize immigrants’ jewellery. He also quoted the prime minister in emphasising that this is one of Denmark’s most misunderstood laws in years.
Foreign Minister Kristian Jensen echoed that line on Thursday in Geneva when he told a highly critical UN Human Rights Council that the international outcry over the bill was due to “gross misunderstandings.”
But has it actually been misunderstood?
Proponents of the bill argue that Danish citizens who find themselves suddenly unemployed and are not covered by any specific insurance scheme, may be asked to sell their most valuable possessions in order to receive state support.
As MEP Anders Vistisen from the anti-immigration Danish People’s Party (DF) told The Local, “the new law is about creating equality between migrants and Danes, so that everyone under the welfare system has the same possibility to receive public benefits”.
Supporters of the bill also argue that “being Danish is expensive”. The country’s expansive welfare system imposes high taxes on Danish residents and citizens in exchange for free health care, education and a number of other benefits which contribute to making Denmark one of the world’s most wealthy and equal nations. Under this light, the new bill would be merely considered as a way for asylum seekers to pay for an almost assured better future.
But former Venstre politician Jens Rohde, who moved to the Social Liberal Party (Radikale) in December over his opposition to the bill, described the government’s move as something “beyond any kind of decency, [it is] outrageous and cruel”.
He also accused Ellemann-Jensen of lying in his CNN interview.
“I do not know why Jakob Ellemann-Jensen denied that jewellery would be taken from asylum seekers arriving in Denmark,” he told The Local.
“They might have changed the value of confiscated goods from 3,000 kroner to 10,000 kroner, but the proposed bill still allows authorities to confiscate immigrants’ valuables, jewellery included,” he added.
Zachary Whyte, an asylum and integration researcher at the University of Copenhagen, said that although the provision to confiscate goods may be stealing all of the attention, there other parts of the sweeping immigration bill that are even more worrying.
“Human rights organisations have focused more on other elements in the bill,” he told The Local.
“These include a delay in processing family reunification for some refugees, so that they would have to wait three years from being granted status to first applying. Since asylum case processing is slowing down, this could potentially mean that refugees might have to wait for five years or more before they could bring their spouses and children to safety in Denmark,” Whyte said.
In regards to the claim that Danes are also asked to sell their goods in order to receive welfare benefits, he emphasised that the unemployed seeking assistance would never have their property searched and their goods seized by the police. This, he says, means the bill by no means makes asylum seekers equal to native Danes.
Rohde described this bill as “a violation of human rights and of the refugee convention” and said the Venstre government’s moves since winning the June 2015 election reveal an increasing shift to the far right in order to accommodate the requests of its support party, DF.
“This move only shows how Denmark’s ruling political class only thinks of refugees as numbers and not as human beings,” he said.
“Rather than wondering what we misunderstood about this law, we should ask Rasmussen: ‘What did the opposition and the world not understand about it?’”
Gabriele Dellisanti is a freelance journalist and travel blogger based in London.