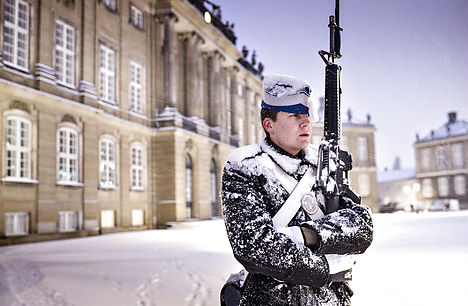 A guard performs his snowy and cold duty outside of the Amalienborg palace. Photo: Bax Lindhardt/Scanpix
Thursday dropped upwards of 20cm of snow on parts of Denmark and the white blanket covering most of the country is almost certain to stick around with temperatures barely expected to exceed the freezing point until Monday.
According to TV2, parts of northern Jutland received close to 20cm of snow, with confirmed measurements of 15cm near Aalborg by mid-morning. In the Copenhagen area, snowfall totals were closer to 6cm, while southern Jutland and the islands of Funen and Lolland-Falster had only negligible snowfall. Thursday's snowfall made for a rough morning commute. Photo: Bax Lindhardt/Scanpix
Thursday temperatures were measured as low as -3.9C in the Zealand town of Gilleleje, while the nation’s southernmost town of Gedser, located on the island of Falster, was warmest at 2.6C
The Danish Meteorology Institute said that a deep freeze would engulf most of the country over the coming days. Temperatures could drop to as low as -11C and aren’t predicted to get much above the freezing pint until Monday before dipping again on Tuesday.