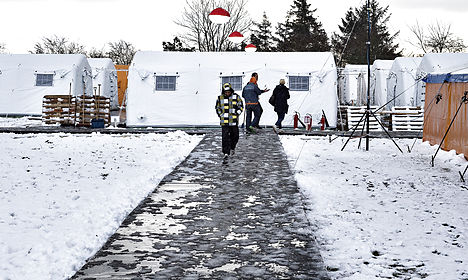 Women in Thisted say that the refugee tent camp's inhabitants make them feel unsafe, particularly at night. Photo: Henning Bagger/Scanpix
Officials in the northern town of Thisted, where a refugee tent camp hosting 365 asylum seekers opened in November,   conceded on Tuesday that they are dealing with a harassment “problem” stemming from the camp’s inhabitants.
“Several young women have felt unsafe on the streets, where they have been accosted by asylum seekers. The same thing has happened on the dance floor out in the nightlife,” Lars Sloth, the director of the city’s children and families unit, told news agency Ritzau.
Sloth added that several residents of the tent camp have also been detained for being too intoxicated.
A Thisted police spokesman said that officers have heard about the problem but have not received any specific complaints from the city’s female residents.
City official Sloth said that public workers and the police would undergo a campaign to inform asylum seekers about what constitutes acceptable behaviour in Danish society.
“First and foremost we want it to be safe and comfortable for all of our residents to move around in Thisted – including in the city’s nightlife. Therefore we are initiating extra measures that will contribute to better understanding, fewer conflicts and thus better security,” he told TV2 News
The problem doesn’t seem to be contained to the Thisted tent camp. Nightclubs in the southern Jutland towns of Sønderborg and Haderslev have also reported that some asylum seekers harass female guests.
“We must say that a large number of the male guests who come from the local asylum centre have a very hard time respecting the opposite sex. In my eyes, it is harassment when one or more men continue to touch a young woman after she has said ‘stop’,” Glenn Hollender from the Sønderborg club Den Flyvende Hollænder told TV Syd.
Rafi Ibrahim, a Syrian who has lived in Denmark for years, said that in Hadserslev the city’s new refugees and asylum centres “don’t know the rules” about how to behave around Danish women.
“If they see a girl, they go nuts. They simply can’t handle it. The try to grab ahold of the girl’s clothes or paw her,” he told TV Syd.
Ibrahim said that there simply is a marked difference between the newcomers’ view of women and what is the norm in Denmark.
“In Syria and many other countries, it is not normal for a strange woman to smile at you. Those girls who are harassed aren’t necessarily scantily-dressed or drunk. Some times it is enough just to be a girl,” he said.