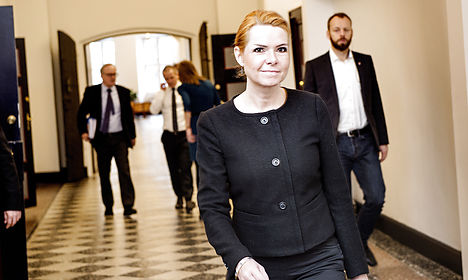 The proposal to strip refugees of their valuables is contained in a draft bill which was submitted to the Danish parliament on December 10th and which is not expected debated by MPs until some time in January.

But the furore over the plan is rumbling on with Police Union leader Claus Oxfeldt now entering the fray by going public with concerns about the practicality of the scheme.

“I don't have a good enough imagination to envisage us taking things like wedding rings from refugees coming to this country,” Oxfeldt was quoted by national broadcaster DR.

Oxfeldt also stated his belief that estimation of specific values of items was outside of police jurisdiction.

“I think most people can tell whether something is worth a thousand or 20,000 kroner, and if there is any doubt, you can have it valued or choose not to take it,” she said, also on DR.

This does not mean that valuation experts would be brought in, according to Støjberg.

“This is about very general principals in Denmark. If you can provide for yourself, you will provide for yourself. This also applies to refugees… The Police must see whether, for example, large amounts of money are being brought in. If they are, stays at asylum centers must be paid for [by the refugee] for as long as possible.

“It is important to say that if anyone comes here with a wedding ring, we will not take it. I have said this from the start, when we presented the proposal.”

Under the proposal, items needed for everyday use such as mobile telephones would also be exempt from confiscation, as well as items of sentimental value – unless these are of very high monetary value, in which case their confiscation can be considered “reasonable”.

Refugees carrying the equivalent of over 3,000 kroner in cash would also see this confiscated.

“Denmark in 2015: where international problems are met by ministers insisting that we will not pinch wedding rings. We have the politicians we deserve.”