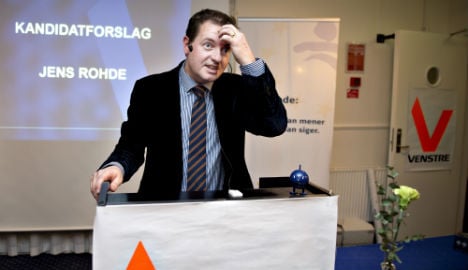 Jens Rohde while campaigning to hbe mayor of Viborg. Photo: Henning Bagger/Scanpix 2013
“Denmark is currently experiencing a norm and value shift that I find deeply worrying,” Jens Rohde of the Venstre party wrote on the website of daily Politiken, where he announced he was joining the centrist Danish Social
Liberal Party.
The EU parliamentarian said he had based his decision on Venstre's increasingly draconian policies to limit the number of asylum seekers, and growing EU scepticism within the party.
“Now it has also become acceptable to … instruct the police to arbitrarily take people's last valuables and their last bit of dignity away from them,” Rohde said.
The minority Venstre government relies on the backing in parliament of the anti-immigration Danish People's Party.
On Friday the Danish government defended a bill that would allow police to search asylum-seekers' luggage for valuables and cash to help pay for their stay, plans that have prompted international outrage and drawn comparisons to Nazi Germany.
Items of personal significance, such as wedding rings, as well as mobile phones will be exempt while cash amounts over 3,000 kroner ($437, 402 euros) will be confiscated under the proposal.
It is the latest in a string of moves by Copenhagen to avoid the kind of refugee influx seen in neighbouring Sweden, where around 150,000 people had applied for asylum this year by the end of November compared to just 18,000 in Denmark.
Other measures have included shortening residence permits, delaying family reunifications and placing adverts in Lebanese newspapers to deter migrants.
Earlier this month, Danes voted in a referendum to reject a government proposal on adopting the EU's justice rules, amid concerns over handing more power to Brussels.
Prime Minister Lars Løkke Rasmussen campaigned for the 'Yes' side but has since struck a slightly more critical tone on some aspects of Denmark's EU membership.