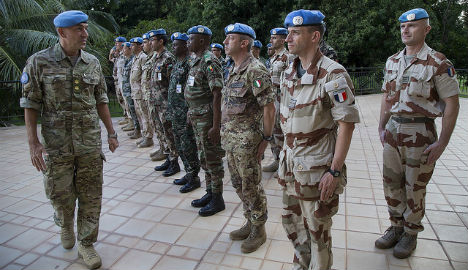 Major General Michael Lollesgaard decorating MINUSMA troops. Photo: Flickr/MINUSMA
Major General Michael Lollesgaard told Denmark’s Information newspaper that it was “insanely annoying” that Denmark’s government had not sent him the 250 combat troops and 30 armoured vehicles he requested in October, which were to form part of a new 550-strong battalion.
“It would really have been a game-changer for us down here,” he complained.
Denmark has instead decided to send 30 special forces commandos and a transport aircraft.
“We are engaged in several other locations, and we want to keep some powder dry, to use the military expression,”  Peter Juel Jensen, the defence spokesman for Norway’s Liberal Party said, explaining the government’s decision not to meet the UN's requests.
“We have the resources we have. Other countries that carry a less heavy burden should step up to the plate.”
The United Nations Multidimensional Integrated Stabilization Mission in Mali (MINUSMA), which Lollesgaard commands, has suffered 56 casualties, making it one of the most dangerous UN missions of recent years.
Lollesgaard told Information that he had no real need for more special forces troops.
“It's always great to have more Danes in the mission, but they make no real difference to us,” he said. “We did not demand special operations forces because we already have a very robust Dutch special forces troop who have promised to stay with us throughout 2016.”
The rebel National Movement for the Liberation of Azawad (MNLA) signed a ceasefire agreement with the government in Bamako in February, but sporadic fighting continues.