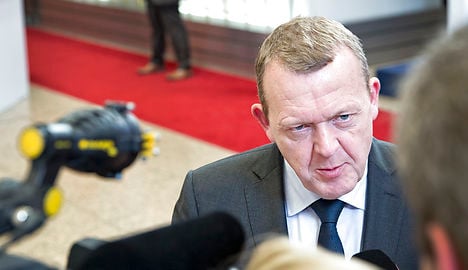 “It is a very unfortunate situation,” Lars Løkke Rasmussen told the Ritzau news agency after briefing leaders of Denmark’s political parties on his government’s response.
“We have spent billions on building infrastructure up in the Øresund region,” he said.  “We have spent millions branding Copenhagen and Malmo as a single metropolitan area.”
Sweden last week announced that it intended its tough new border regime at the Øresund bridge linking the two countries to come into effect on January 4th.
As part of the regime, Sweden is compelling all companies whose trains or ferries cross Sweden’s borders to ensure that their passengers are carrying valid ID documents beforehand.
Løkke Rasmussen said that his government had on Monday informed Denmark's other parties in that the country was prepared to impose temporary border controls at its own borders with Germany, if the Swedish move led to a marked growth in asylum applications.
“We have informed the other parties that we are now fully prepared and have full authority, if we decide that it is necessary, to establish both border controls and ID checks at the Danish–German border,” he said.  “We are ready to respond, if necessary.”
But he stressed that Denmark's authorities would only take such extreme measures if there was evidence that it would reduce the numbers seeking asylum in the country.
“We do not want to take on a Swedish immigration policy,” he said. “I am guided by one thing, and that is to take care of Denmark. It is the government's policy that its is the numbers that matter, and we must do what is sensible to keep the number of asylum seekers as low as possible.”
“It is our clear opinion, after analyzing the situation that if we established a border in Denmark today, we would get more, not fewer asylum seekers,” he said.