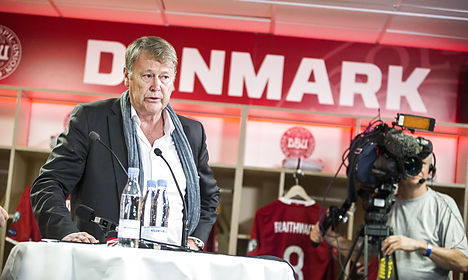 Åge Hareide was introduced as Denmark's new coach on Thursday. Photo: Nikolai Linares/Scanpix
Åge Hareide was named Denmark's new national football coach on Thursday, replacing Morten Olsen who stepped down last month.
“Our team and our fans deserve to go to the World Cup in 2018 and I look forward to fighting for it with the players,” Hareide said in a statement.
“The Danish national team has great potential, with a very strong defense and a number of strong individualists who make the team flourish,” he added.
The 62-year-old Norwegian replaces Olsen, who quit on November 17 after Denmark failed to qualify for Euro 2016.
Hareide last week announced his departure as coach at Malmö. He has previously coached several Scandinavian teams, including Danish side Brøndby, and was in charge of the Norwegian national team between 2003 and 2008.
“With Åge Hareide we get a coach who has great passion, experience and results as a coach both at the club level and for a national team,” the chief executive of the Danish Football Association (DBU), Claus Bretton-Meyer, said in a statement.
Hareide said that he expects big things out of his new club.
“The potential on the Danish national team is much, much bigger than what I worked with when I was the Norwegian national coach,” he said.