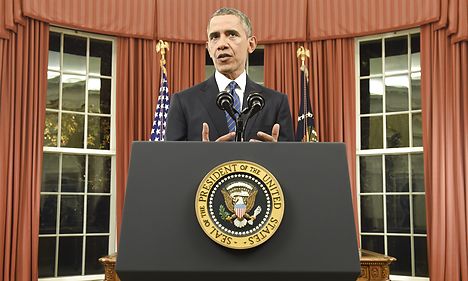 US President Barack Obama addressed his nation earlier this week and has now reached out to coalition partners. Photo: Saul Loeb/Scanpix
Foreign Minister Kristian Jensen confirmed on Tuesday evening that the US has asked Denmark to contribute more to the international effort to fight Isis.
“Normally we don’t comment on which requests we have received from other countries but in this case, the US has itself said that it will contact its allies and thus I can confirm that Denmark has also been contacted,” Jensen told Jyllands-Posten.
Jensen said that the Danish government was “positively considering” the request.
Denmark has already expressed a willingness to up its military efforts against the terror group. The nation joined the international coalition fighting Isis in October 2014. Danish F-16s flew 547 missions over northern Iraq and dropped a total of 503 bombs before the jets were brought back to Denmark for repairs.
Jensen has promised that they will return to action in early 2016. Jensen has also suggested that the Danish mission will be expanded to include striking targets in Syria.
After the new request from the US, Jensen said Denmark “has an obligation” to look at how it can increase its military efforts.
“They [the Americans, ed.] are asking for help to fight ISIL [another name for Isis, ed.] and it isn’t limited to a single geographic area. ISIL is a threat to our way of life in Denmark. We have seen with the terror attacks in both Beirut and Paris that ISIL has the ability and unfortunately also the will to attack other countries,” he told Politiken.
Both Norway and Sweden have also been asked by the Americans to increase their military contributions.