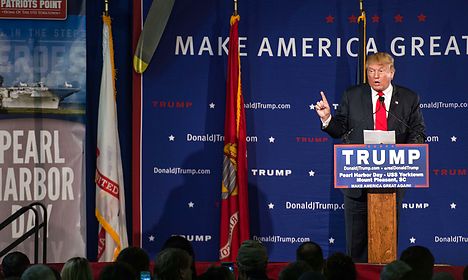 US Republican Presidential candidate Donald Trump called for a ban on all Muslims from entering the US on Monday at a rally in South Carolina that took place within days of a mass shooting carried out by two Muslim perpetrators in San Bernardino, California, in which 14 people were killed.

Trump went on to claim that areas of both Paris and London are “completely radicalised”, with police “afraid” to enter them. These were promptly debunked by authorities in both cities.

“It is just stupid. He says the most crazy things, but this must be one of the craziest things he’s ever come out with,” Søren Espersen, a spokesman for the anti-immigration Danish People's Party, told Jyllands-Posten. Espersen himself is known as a ‘hardliner’ in a party that advocates reducing ‘non-Western’ immigration to Denmark.

“It is actually remarkable that he can say these things and still possibly win the Republican nomination. To start with it was no more than a joke, and we all laughed – but now it is becoming quite concerning,” Espersen continued.

Foreign spokesperson Michael Aastrup Jensen of the governing Venstre party, who recently returned from meeting a number of Republican politicians in New York, was equally critical.

“You would have thought that Donald Trump reached the bottom of the barrel some time ago,” Jensen told Jyllands-Posten. “His proposal is against all human rights and only goes to show that he is in no way a serious politician.”

“This is yet another example of how difficult it is to imagine Trump in the White House,” Lidegaard told Jyllands-Posten. “It would in no way benefit either democracy or the international strength of the United States.”

Espersen, who is the chairman of parliament's Foreign Policy Committee, expressed serious concerns about a potential President Trump.

“It would mean there would be lots of things we [in Denmark] would have to review. At the moment, we almost blindly follow the US and are always prepared to support them. It is not certain that would continue were Trump to be elected. I think the USA would wake up with a bad hangover the day after his election.”