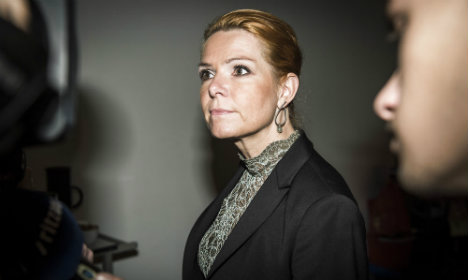 Although an agreement is yet to be finalized, there will be new stricter asylum policies implemented. Photo: Asger Ladefoged/Scanpix

The ruling Venstre government reached an agreement with support parties the Conservatives and Liberal Alliance, along with primary opposition party Social Democrats, on a set of new stricter policies for asylum seekers arriving in Denmark. The anti-immigration Danish People’s Party (DF) refused to fully back the deal after its push for the creation of so-called refugee villages was rejected.

The new restrictions will be put before parliament in the coming days, with a majority already secured for many of the 21 initiatives that will be put forward. The package is a continuation of the 34 planned changes the government announced in mid-November. The first 13 of those were pushed through parliament in a fast-track manoeuvre criticized by legal experts and human rights organizations.

DF’s desire to create refugee villages was a sticking point in the government's attempts to secure a wide-reaching agreement on the package. DF has argued that refugees should be kept in self-contained villages with an outlook to send them back to their home countries as soon as possible.

“Fundamentally, we actually don't think we should integrate this large group of people, but rather that they should go back home and help build their countries up,” DF spokesman Peter Skaarup told broadcaster DR.
Integration Minister Inger Støjberg told Ritzau that there are a number of problems with DF's suggestion.
See also: Government criticized for fast-tracking asylum laws

“How should we provide education to the children? What about Danish courses for adults? What about health and getting into the labour market? We need to look into all of those things first,” she said.

“We have offered to investigate these possibilities, but that was not enough, especially not for the Danish People's Party,” she continued.

Although DF wanted to go further, Støjberg insisted that the points already agreed upon will represent a significant additional tightening of Denmark's asylum and immigration policy.

“There is consensus on a number of points, which means that we will have the tightest asylum policy in comparison to the countries around us,” she told Ritzau.

The measures that have been agreed upon by the majority parties include, among other things, that the wait for refugees to bring their families should increase from the current one year to three should wait for three years for family reunification from a year today and that the length of residence permits should be shortened.

UN convention refugees will see their permits shortened from the current five years to three, while the residence permits for refugees granted regular protection status will drop from five years to two.

Those on the previously-introduced temporary residence scheme will still be granted one year permits but will only be able to renew them for one year at a time instead of the current two years.
DF called for all refugees to be given just one-year permits “regardless of status”, a suggestion that Venstre spokesman Marcus Knuth told Politiko on Sunday he “didn't see a problem following”.

The plan also calls for requiring refugees to pay for as much of their accommodation in Denmark as possible and will further decrease the benefits offered to asylum seekers and refugees.

Støjberg acknowledged that the new measures will push the limits of international rules for asylum and immigration, but defended the package as necessary for Denmark.

“We have gone to the edge of the conventions, and it is true that there is a procedural risk in relation to the issue of family reunification, but it's a risk I'm willing to take,” she said speaking to Ritzau.

The new proposals have been met with fierce criticism from the Danish Refugee Council.

“I have never before heard of such brief general residence permits to refugees. It is new, both in Denmark and in the rest of Europe,” spokeswoman Eva Singer told Politiko.