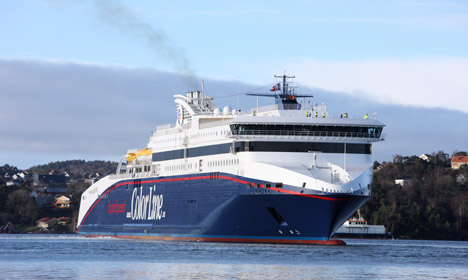 Police said they were surprised by just how drunk some passengers were. Photo: Tor Erik Schrøder / SCANPIX
Norway’s decision to step up border controls and check all arriving ferries has run in to an unexpected problem: intoxicated passengers coming from Denmark.
Police told broadcaster NRK that officers are having to use their energies on drunks instead of carrying out border controls at the Kristiansand port.
Agder Police spokesman Jan Vidar Ødegaard told NRK that on Friday night, several passengers were too drunk to find their travel documents or carry out conversations with officers.
See also: Norway border controls stop Syrians in Denmark
“We are surprised by how many of them are extremely drunk. Under these conditions, we don’t have the ability to carry out good and effective border controls,” Agder Police spokesman Jan Vidar Ødegaard said.
“One of the passengers had to be put in handcuffs and taken to the station after assaulting a guard. There was also a woman who feel and had to be taken away by ambulance,” he added.
The Norwegian police said that they are concerned about the amount of drinking taking place on the Color Line’s route between Hirtshals and Kristiansand and have suggested that the ferry operator cut off alcohol sales earlier.
A Color Line spokesman, however, said that the incidents were isolated and not sign of a general problem.
According to Danish news agency Ritzau, it was unclear if the drunken passengers were Danes or Norwegians.